High-ranking member of the Black Organization

Kill all enemies of the Black Organization.

Gin is the central antagonist of the anime/manga series, Case Closed, also known as Detective Conan. He is a high-ranking member of the Black Organization and Shinichi and Akai's arch-nemesis.

Gin is tall, handsome, and he has long silver hair that reaches down to his hips, and he has cold, icy blue eyes of a cold blooded killer. He's also a man of uncertain age, and looks very menacing. Gin's appearance has never changed in all of his appearances, as he always wear a black fedora with a grey or white hatband. His only shown outfit is a knee length, notched lapel, black trench coat with the collar upturned to obscure part of his face and a loose white turtleneck underneath, and he likely also wears a ballistic vest beneath these. Gin wears black trousers and black dress shoes. When trying to avoid leaving fingerprints, he dons a pair of white gloves (black in the anime).

Gin is among the most loyal members to the Black Organization. He follows the Boss of the Organization's orders most closely and virtually never acts against their greater interests. He is also one of the Black Organization's most dangerous operatives; Conan miscalculating his intelligence, abilities, and speed of response have resulted in several very close calls and awry plans. He has yet to be truly outsmarted by Conan, although he has been foiled a couple times. Gin is a merciless and efficient assassin, who has no compunctions about killing or threatening his teammates. Despite his loyalty, he dislikes how the Boss treats Vermourth so special.

Fitting his icy personality, Gin's displayed range of emotions so far is relatively limited. Wearing a threatening smirk, he enjoys hunting traitors, watching the plans he has concocted succeed, and cornering his targets. Although he seems to take satisfaction with taking out someone personally, Gin is also satisfied with orchestrating a target's death even if he does not pull the trigger himself. He is not easily frustrated and takes setbacks in good stride, shown when he coolly orders a retreat when Shuichi Akai ambushed the Black Organization. He is patient and cautious, preferring to wait until success is most likely. He does not like potential loose ends, preferring to get rid of anything doubtful. Gin does not trust anyone and does not fully believe anything he doesn't witness himself.

Gin first appears when he and his partner in crime, Vodka goes to Tropical Land to finish a deal with a company owner they were blackmailing for gun smuggling. The two board the Mystery Coaster and witnessed the entire murder. Later, Gin and Vodka got caught up by Shinichi Kudo when finishing the deal, however Gin knocks down Shinichi and force-feeds him APTX 4869, before departing and saying to a dying Shinichi, "So long, great detective.". Unbeknownst to Gin however, the poison does not kill Shinichi, but rather turned him into a child, who took the name of Conan Edogawa.

Gin and Vodka reappeared when they confront Akemi Miyano, who successfully completing a bank robbery. At the shipping yard, Akemi tries to tell Gin to hold up his end of the bargain, but he tells her the Organization wouldn't let her sister (who is later revealed to be Shiho Miyano) leave anyway because she was too valuable, before killing Akemi and flees away with Vodka once again.

Gin and Vodka are then ordered to kill a former business partner who had become useless by tricking her into making a deal, lied to her that it is the information about 400 million yen worth of gold, on a Shinkansen. However, the case actually contains a bomb that was set to explode when she calls a certain number on her mobile phone. However, Shinichi, now under the disguise of Conan Edogawa, managed to kick the case out and makes in exploded without any harm. Unfortunately, the said partner knows little about Gin and Vodka or their Organization so their true mystery was still not solved.

In another case, Gin found an auburn hair in the car and he deduced it was Shiho's. However, Conan and Haibara (Shiho in disguise) followed him as they knew he was going to go to the Haido Hotel. There, Pisco kidnapped Haibara and took her to a room with a big fireplace. When Gin and Vodka arrived at the room, she (with her adult body because of the Baikal) was hidden in the fireplace, but Gin heard her breath and discover her location. As such, Gin confronted Shiho and brutally shot her. When he was ready to kill Shiho, Conan arrived and shot a sleeping dart at Gin, but the latter shot himself in the arm in order to stay awake. After that, he climbed down the chimney, killed Pisco following the order of the Boss and climbed back up. Gin and Vodka then returned to their car and Vermouth wants to discuss with them about Shiho (hinting that Gin knows Shiho very well and used to have some sort of relationship with her in the past).

On another occasion, Gin, along with Vodka are seen discussing with Vermouth about Shiho in a bar. 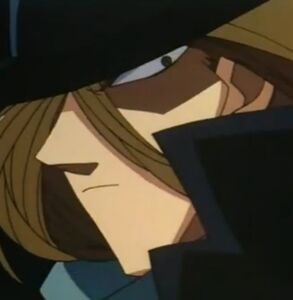 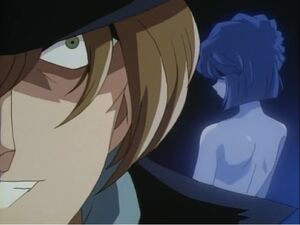