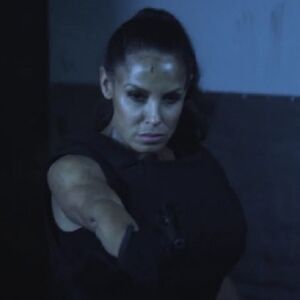 Gina was a villainess from the 2015 film, Gridlocked.

She was played by WWE Hall of Famer Trish Stratus.

Gina was part of a SWAT police squad led by David Hendrix, and the group was on the defensive when a group mercenaries, led by Korver (the main antagonist), were after millions of dollars worth of bonds. In the film's climax, however, Gina turned heel when she is caught by Brody Walker (a celebrity doing community service) taking the bonds out of the mercenaries' truck, and it was later revealed by Brody that Gina set up Scott Calloway as the traitor.

Gina cemented her heel turn and fired shots at Brody and Scott, after learning that Brody was right behind her and also after seeing Brody attempt to free Scott. When asked by Scott about her motive, Gina simply stated that she did it for the money, right before she killed Scott. She is later shot by Brody, who played dead to avoid being killed by Gina, but after seeing that Gina was only shot in her jaw, the two fought each other. After the brawl, Gina escapes, but she is quickly killed by Brody with a single shot to her head. 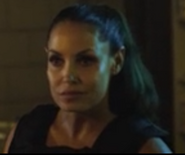 Add a photo to this gallery
Retrieved from "https://villains.fandom.com/wiki/Gina_(Gridlocked)?oldid=2634453"
Community content is available under CC-BY-SA unless otherwise noted.