Have sex with Dusty

Deranged Corrupt Official
Gina Jabowski is one of the main characters in Paradise P.D.. She is a corrupt police officer, who works for Paradise Police Department. She is guilty of sexual harassment and police brutality.

She is voiced by Sarah Chalke.

Gina Jabowski was born to an unnamed mother and father in a redneck family in the podunk town of Bumfuque. She was the youngest child, with her two older brothers, Cooter and Bo. The family committed several armed robberies together. Gina was really young and the time and therefore, too young to help commit the crimes herself but the family still took her along anyway and she scrapbooked the events, as this was her hobby at the time.

When Gina was ten years old, The Jabowski Family was on the run from Paradise P.D., on speedboats crossing the ocean. Randall Crawford was shooting at them and Gina's father used her as a human shield. A bullet went straight into Gina's skull, putting her in a coma. Mr. Jabowski threw Gina's comatose body into the ocean and sped off, telling his wife that they would eventually "make another kid".

Gina's comatose body was found and taken to the hospital, where she lay in a coma for eleven years. When she finally woke up, she had no memory of anything that happened in her life before then, aside from occasional screaming nightmares. Gina still retained her basic knowledge, so she was able to function as a human being in society. However, her coma didn't come without damage, as she would have the tendency to have violent outbursts of anger, which weren't present when she was a kid.

Gina eventually got a job working for Paradise Police Department, with her boss being Randall Crawford, the very man who shot her as a kid. However, neither of them recognized each other. Gina quickly became one of Randall's most favored employees due to her brute strength and appetite for violence.

While working at her job, Gina fell in love with her co-worker, Dusty Marlowe, who, at the time, was actually a really buff military man. Gina wanted Dusty to get fat so she forced him at gunpoint to eat a bunch of donuts until he completely let himself go. After fattening Dusty up to perfection, Gina found him sexually attractive enough to ask out. Dusty would reject her but Gina was having none of that and proceeded to sexually harass him in hopes that one day, he would have sex with her. When it came to her job, Gina occasionally took things way too far, by giving criminals harshly extreme punishments for causing minor felonies.

In "Welcome to Paradise", Gina made the one-hundredth arrest of her career, when she assumed the role of "arrester" when the team busted Terry Two Toes.

In "Black & Blue", Gina got sick of listening to Gerald Fitzgerald play the piccolo, while she was trying to do her work, as sometimes, it would blow their cover. Gina demanded to Randall that Fitz's piccolo be confiscated and replaced with a gun, which Randall agreed to do. When Fitz patrolled Paradise at night, he freaked out when he saw his reflection and accidentally shot himself in the leg, which got caught on camera via his police car's dashcam footage. Gina leaked this footage to the internet, which made Fitz go viral on the news.

When Fitz got in trouble with the court for his careless use of his gun, Gina broke into the courthouse and took Fitz out to save him from getting in trouble. The media tracked them down to the woods, where Gina had herself, Fitz, and Dusty all dressed up in assorted outfits, to confuse the media until they found the situation too weird to continue looking into. After this, Gina had a change of heart, when it came to Fitz's piccolo, and she gave it back to him, now understanding how Fitz's PTSD affects his life and seeing this as a healthier alternative.

In "Meet the Jabowskis", Gina was reunited with her old family, after tracking them down to find who shot her. Although she was initially overjoyed to be with them again, her heart was broken, when she found out that her family was just a bunch of criminals, who were responsible for her getting shot.

In "Paradise Found", Gina worked with Kevin to find security footage that would clear Dusty's name of a murder he was framed for. During this time, the two ended up in a trap where Kevin was nearly blown up by C4. Gina jumped on him to cover him from the explosion, saving his life at the risk of her own baskside. Gina's act of heroism actually made Kevin fall in love with her.

In "Blimp City", Gina's AI robotic vagina went rogue and took over her body so she could kidnap Dusty and torture him sexually in her house. Kevin and Bullet came in and helped destroy Gina's now violent genitals and defeat the army of drones to save Gina's life. After the destruction of her artificial vagina and the absence of her original, the current state of her genitalia is still unknown.

In "Fetal Attraction", Kevin admitted his feelings for Gina, which Gina found very flattering. Gina was smitten for Kevin and officially became his girlfriend.

In "What Happens in Twatemala', Gina went on a bunch of dates with Kevin. However, despite being in love with Kevin romantically, she still struggled with her sexual fixation with Dusty. Gina couldn't have sex with Kevin because of how disgustingly skinny he was and knew the only way to find Kevin sexually appealing would be to have the bullet in her brain removed so that she could go back to normal again. Dr. Funtlichter warned her that this surgery only guaranteed a 2% chance of survival but Gina took the risk anyway in the name of love.

In "PARAD-ISIS", Gina survived the surgery and her brain finally functioned normally. Not only did she find Kevin attractive and fat people repulsive but she also no longer had violently psychopathic tendencies and was now a sweet and kind-hearted woman, who would never hurt a fly, which made her a liability in the workplace. Gina didn't care that she wasn't good at her job anymore and proposed to Kevin and very quickly scheduled a wedding with him. However, on the day of their wedding, their wedding chapel was invaded by ISIS and Gina knew the only way to stop them would be for Kevin to put a bullet back into her brain, which he reluctantly did. Gina slaughtered all of the terrorists and saved everybody but at the cost of her pursuing a happy relationship with her true love. When Kevin congratulated her on saving everybody, Gina, on impulse, strangled her lover until he went blue in the face. Gina came to her senses and saw how horribly she was acting, so she dropped Kevin and ran off, crying, unhappy with who she became. Kevin tried to contact her, begging her to come back, confident that they'd be able to work things out but he got no response. This is how the third season ended so it's currently unknown where Gina is or what lies ahead for her in the future.

Gina Jabowski is a sexually attractive, Caucasian adult female with chin-length blonde hair, light pink lips, and large full breasts. As a cop, she wears the obligatory Paradise P.D. police uniform and she has her shirt collar open, to expose her cleavage. Gina also wears a black clip-on gun holster on her belt.

Gina Jabowski is an abrasive, trigger happy, quick-to-violence policewoman, who loves every minute of working at her job because she gets to live out her savage fantasies of beating dirty criminals to a bloody pulp and insulting them with every profanity and slur in the dictionary. 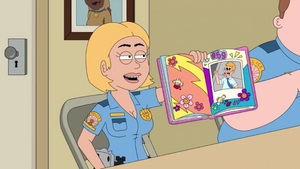 Gina shows off her scrapbook of gratuitously violent arrests. 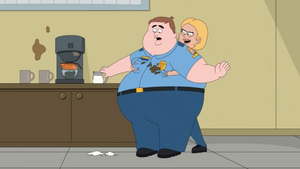 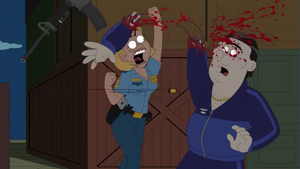 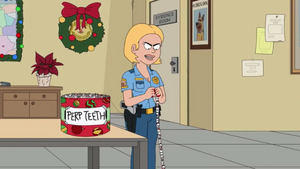 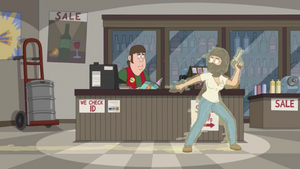 Gina robs a liquor store, while covered in vaseline. 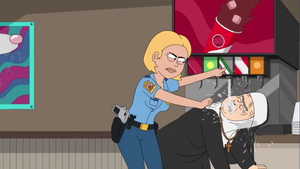 Gina waterboards a Catholic nun for putting Sprite in a water cup. 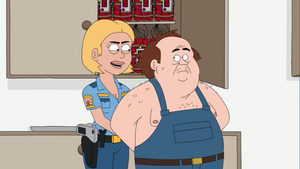 Gina, the pro-life pro-gay Nazi, getting an abortion from a NRA supporting Muslim transgender, while she gets raped by a black Trump supporter. 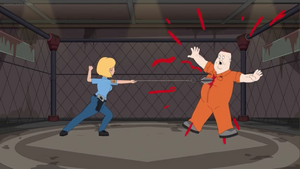 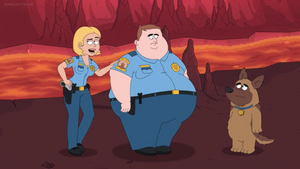 Gina ends up in Hell after she dies because of her villainy. 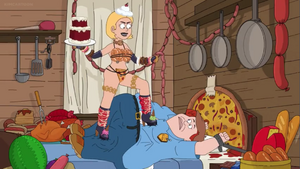 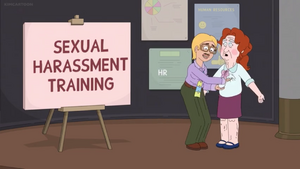 Connie and Hopson promote sexual harassment.
Add a photo to this gallery

Retrieved from "https://villains.fandom.com/wiki/Gina_Jabowski?oldid=4386571"
Community content is available under CC-BY-SA unless otherwise noted.