Be with Dante forever (failed)

Gina King is the secondary antagonist of the Criminal Minds episode "The Performer". She is a delusional schizophrenic who is obsessed with the has-been rock star Dante, whom Dante's manager Ray Campion manipulates into killing women in order to create publicity for Dante's new album.

She was portrayed by Inbar Lavi.

Gina suffers from severe paranoid schizophrenia, and has delusions that she is a vampire. She becomes obsessed with fading Goth rock star Paul Davies, whose stage persona is a vampire named Dante, as she creates websites devoted to him writes him rambling fan letters in which she promises to kill for him so they can be together "in the undead".

Dante's unscrupulous manager, Ray Campion, reads Gina's letters and concocts a plan to use her to boost Dante's flagging album sales. He contacts her and tells her that Dante wants her to kill for him to prove her love, and at Campion's instigation strangles five women, pokes fang-like holes in their necks to drain their blood, and write the words "The Liar" - the title of Dante's latest album - on their arms in their own blood. One of the victims, Tara Ferris, is Gina's best friend and fellow Dante fanatic.

The murders attract publicity, especially after the FBI's Behavioral Analysis Unit arrests Dante on suspicion of committing the murders. They take him into custody after Agent Emily Prentiss notices that a car belonging to one of the victims is parked in Dante's drive way, having been planted there by Campion. As Prentiss questions Dante, Agent Spencer Reid examines the crime scene evidence and finds that the DNA from saliva found on the victims' wounds belongs to a woman. After technical analyst Penelope Garcia uncovers Gina's obsessive online writings about killing for Dante, she and Reid deduce that she is the killer.

Campion calls Dante to tell him that sales of The Liar have gone through the roof, and promises to "fix" his legal predicament, alerting the team to his involvement in the murders. Agent Jennifer Jareau goes to arrest Gina, but Campion knocks her unconscious with a shovel, and tells an agitated Gina to kill her. Before Gina can do anything, however, the rest of the BAU team arrives and takes her and Campion into custody. Gina is then presumably institutionalized. 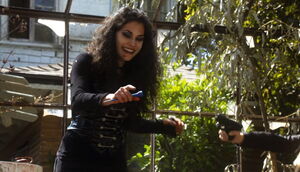