Ginger is Garlic Jr's right hand man as well as leader of his first trio of henchmen, along with Nikki and Sansho, and one of the three secondary antagonists from the Dragon Ball Z film, Dead Zone, and a cameo antagonist in Fusion Reborn.

He was voiced by the late Kōji Totani and currently by Yasunori Masutani Dragon Ball Heroes in the Japanese version, and by Terry Klassen in Ocean Group dub, Troy Baker in Funimation dub, Ed Marcus in some lines of Dead Zone and David Gasman in majority of lines of Dead Zone in AB Groupe dub in the English version.

The smallest of the three, Ginger is the one who most closely resembles Garlic Jr. in his overall appearance, except for his skull-like nose which gives him the appearance of a vampire bat. He has dark olive skin and red eyes, and he is typically seen wearing a large dark cloak.

Ginger and his two cohorts first appeared when they attacked and devastated Piccolo, so as to kill him and therefore Kami. He later went out to find the Dragon Balls for his master and tracked the Four Star Ball to Son Goku's home where it was on top of Son Gohan's hat. After Chi-Chi and Gyumao refused to hand it over, Ginger easily succeeded in getting them out of the way. When Gohan ran away, Ginger decided to just take the boy along with the ball and presented him to Garlic Jr., who decided to train him, which surprised his minion. Finally, Ginger and Sansho were successful in finding the remaining dragon balls and Ginger led his cohorts in cheers of victory after their master succeeded in making a wish for immortality from Shenlong. When Goku arrived at Garlic Jr's fortress, the trio confronted him and grew in size and strength by letting out their own battle cry (In Ginger's case, "Gingerbread!" As the fight found its way onto the outside of the fortress, Ginger used his ability to pull swords out of his arms and used them to fight Goku, until the Saiyan knocked them out of his hands with his nyoibo. The two traded blows until the Saiyan was successful in knocking him off the balcony they were battling on with a swift kick to the back. Ginger fired an energy blast at him, only for Goku to counter with a Kamehameha wave that easily broke through Ginger's attack and sent him flying into a tower that Nikki had crashed into earlier. The Kamehameha blasted them both, killing them and burying them in rubble.

Along with countless other Dragon Ball antagonists, Ginger makes a cameo appearance in the 1995 film Dragon Ball Z: Fusion Reborn when the residents of Hell make their escape to Earth.

Ginger possesses pretty much the same powers as the other characters in Dragon Ball, namely energy blasts, flight, and superhuman abilities. He does have a unique ability, he can pull out a pair of sword-like appendages. Nikki has a similar ability. 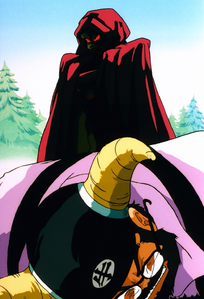 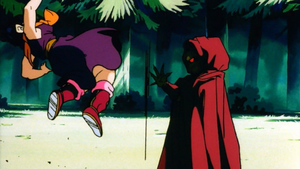 Ginger uses a Kiai on Chi-Chi. 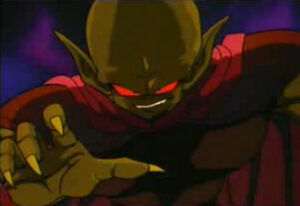 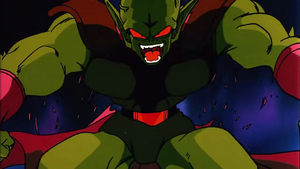 Ginger in his muscular state. 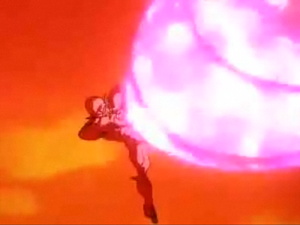 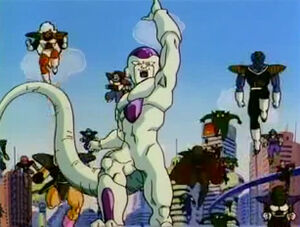