Speculated to be founded by Frieza

Eliminate Vegeta.
Collect the Dragon Balls for their master Frieza (all failed).

Comical Mercenaries
The Ginyu Force is an elite team of mercenaries who serve Frieza in Dragonball Z and Dragonball Z Kai. It consists of five powerful warriors: Recoome, Burter, Jeice, Guldo, and Captain Ginyu, the leader. They are the secondary antagonists of the Namek Saga, while Frieza's Army serve as the main group of antagonists. They are also the rest of Frieza's men that the Z-Fighters face before dealing with him.

After Vegeta killed Zarbon, Frieza summoned the Ginyu Force to find the Dragonballs and bring him a scouter. The Ginyu Force (shadowed at first, not unlike the Big Five from Yu-Gi-Oh! and the Witches 5 from Sailor Moon S) left Planet Frieza and arrived on Namek, revealing themselves to be goofballs who like to strike poses they think are cool. They arrived at the site where Vegeta, Krillin, and Gohan (who, by this time, had joined forces) had all seven Dragon balls. Burter used his super speed to retrieve one as Vegeta threw it away, and Guldo used his Time Freeze to take one before Krillin could destroy it.

Ginyu took the Dragonballs to Frieza after Recoome, Burter, Jeice, and Guldo decided who would fight Vegeta by doing rock-paper-scissors. Recoome won, and decided to let Guldo fight Krillin and Gohan. At first Guldo was at a disadvantage, but eventually trapped Krillin and Gohan with his Mind Freeze. Before he could skewer them, however, Vegeta attacked and killed Guldo with an energy wave. Recoome stepped up for his fight with Vegeta, and soon gained the advantage. When Krillin and Gohan stepped in, Recoome beat them up too. When Goku arrived on Namek, however, he knocked Recoome out with an elbow to the stomach. Burter and Jeice stepped up to fight Goku, but he dodged their every blow so quickly no one could see him move.

Burter and Jeice unsuccessfully tried several ways of defeating Goku, and eventually Goku defeated Burter, knocking him out. Jeice ran off to get Ginyu, whom Frieza had left behind at his spaceship to guard the Dragonballs. Vegeta killed Burter and Recoome while they were unconscious. Jeice and Ginyu arrived at the battlefield where Ginyu fought Goku. Goku soon revealed his power level to be way above Ginyu's, so Ginyu switched bodies with Goku and arrived at Frieza's ship with Jeice to fight Krillin and Gohan. However, Ginyu was getting weaker, as he was unable to use his mind and body together, and was losing the battle, while Vegeta fought Jeice, and brutally killed him before injuring Ginyu. Ginyu tried to switch bodies with Vegeta, but Goku jumped in front of him, switching them both back to their original bodies. Ginyu tried again, but this time switched with a frog that Goku threw in front of Vegeta, and remained in this form, unable to speak and say "Change Now!"

Despite their defeat, all members of the Ginyu Force reappeared during the fight with Frieza. Captain Ginyu the frog met up with Bulma, who put a translator on him. He took advantage of the opportunity and switched bodies with Bulma, leaving her trapped in the body of a frog. Ginyu arrived at the battlefield, somehow able to sense energy signals in Bulma's body. He watched the battle between Goku and Frieza while pretending to be Bulma, but soon Gohan and Krillin discovered his true identity and he attempted to switch bodies with Piccolo, but Gohan threw Bulma in front of him, and Ginyu switched back with her and became a frog again.

In the following episode, Recoome, Burter, Jeice, and Guldo, who were all dead, were invited over to King Kai's planet, attempted to conquer it, and fought Yamcha, Tien, and Chiaotzu. The good guys gained the upper hand, and soon they were defeated - Burter and Jeice by Tien, Recoome by Yamcha, and Guldo by Chiaotzu - and sent to Hell where they landed in the Bloody Pond.

Recoome, Burter, Jeice, and Guldo, along with Cell, Frieza, and King Cold, terrorized ogres in Hell before Goku and Pikkno came to stop them. Goku defeated the Ginyu Force easily - first Jeice, then Burter, then Guldo, then Recoome. Later, Pikkon threw them and Cell onto a spiked mountain, and they were patched up and thrown into a jail cell along with Frieza and King Cold. Recoome than challenges everyone to  an arm-wrestling contest to pass the time only for them to tell him to "shut-up."

Ginyu, the last surviving member of the Ginyu Force, was killed either by Super Buu's Human Extinction Attack or by Kid Buu blowing up the earth. Recoome, Burter, Jeice, and Guldo were last seen in Hell alongside Frieza, King Cold, Cell, Dr. Gero, Babidi, and Appule watching the fight between Goku and Kid Buu. As with most of the others, they root for Buu.

In the super version Ginyu returns when he takes over Tagoma's body and returns to serve Frieza again but was killed by Vegeta making him the last member to be killed by Vegeta. One could assume that he reunited with his men after getting sent to hell for his crimes.

The Ginyu Force are a team of highly elite and powerful individuals. They are ordered to pull off services of any kind, usually assassinations. They are hired by Frieza as bodyguards and secret soldiers.

In terms of strength, Ginyu is the strongest, followed by Recoome, Burter, Jeice, and Guldo. They are each labeled with a unique attribute specifically defined for them: 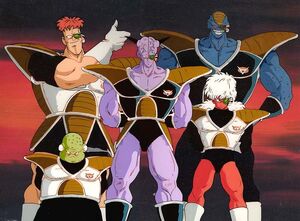 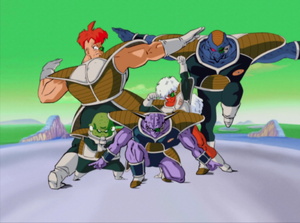 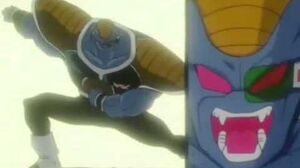