Giran (Japanese: ギラン) is a dragon-dinosaur like monster that participated in the Martial Arts Tournament in the anime Dragon Ball. Giran and Goku attempted to battle face-to-face, but it was delayed due to a rainstorm. At a cafe, Giran challenged some players and asked several times for a glass of milk. The next day, Goku and Giran had a rematch at the Marial Arts Tournament. After Goku broke free from Giran's Merry-Go-Round Bubble Gum technique, Giran forfeited the match, allowing Goku to move on to the semi-final.

Later on, Giran terrorized an animal village and attempted to kill two bears, but Tambourine stopped him and fought him. Giran used his Merry-Go-Round Bubble Gum technique on Tambourine, but broke free and killed Giran by impaling his sides of his body with his arm. 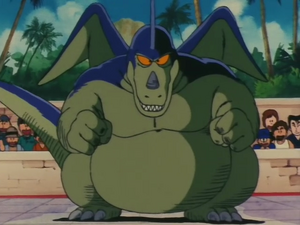 Giran killed by Tambourine.
Add a photo to this gallery

Retrieved from "https://villains.fandom.com/wiki/Giran_(Dragon_Ball)?oldid=3183126"
Community content is available under CC-BY-SA unless otherwise noted.