Member of the Raimon Gang

Handing out his customers Lucky Charm.

Giwi Newzie is a kiwi-themed Gangler Monster who is a member of Raimon Gang and the main antagonist in episode 24 of the 2018 TV series Kaitou Sentai Lupinranger VS Keisatsu Sentai Patranger. He is also equipped with a signal baton-like treasure called L’évasion.

He was voiced by Yoshinori Edagawa.

Giwi Newzie's head is a green kiwi head wearing glasses and a leafy green hat, on his green right arm it has green feathers on it, on his red left arm its a condors claw, his shoulders are white eggs with gems that make the green cape, his green chest has a Gangler safe on it and he is wearing green boots, his weapon the Risk Screw is a gold and white corkscrew longsword.

In episode 23 Giwi Newzie made his first appearance at the Gangler Mansion along with his associate Ushibaroque the Brawl and his leader Raimon Gaorufang at a dinner table this early.

A while later both he and Raimon ambushed Noel and Tooma at Ushibaroque's hideout. Then they become the judges to see which one is the best chef and to ruin Ushibaroque reputation they declared Tooma the winner.

After that both he and Raimon battled Lupin Red and Yellow respectfully.

In episode 24 he'd made his second appearance disguised as a club owner of this club called Nu-Zetto where he hands these lucky charms for those who visit the club. However once the police arrived both he and his Pordermen staff revealed themselves, so he sent Porderman to battle the police. But when they're about to fire at Giwi he'd used the ability to evade the shots after that he retreats.

A while later he and Raimon were at the warehouse paying the money that he earned for more Lucky Charm from Zamigo Delma.

A while later when everyone has these pendants on they began to transform into plants to sap the energy from and he'd appeared at the same warehouse today when he and the Pordermen to battle the thieves and police. But same thing at the club is he used this ability to deflect the shots and attacks. However due to Lupin Red wearing the pendant he'd manage to land some shots on Giwi, however due to every luck that he has the more plants began to cover, so Lupin Blue quickly gained access to Giwi's safe (which his password is 1-9-2) and got L’évasion (which translate as "Escape") Signal Baton, so without the treasure in his safe Giwi Newzie was taken out by PatrenUgou Patren X and once he was defeated the victims that wore these pendants disappeared freeing them from their plant-like prison.

However thanks to Goche Ru Medou he's been enlarged and now he battles X Emperor Gunner and Pat Kaiser after that he was then destroyed by their finisher PatKaiser Bullet Strike and X Emperor Slash Strike. 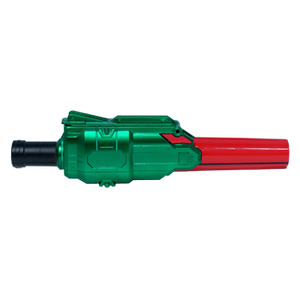