Leader of the Starmen (Mother)

Unlimited yet uncontrollable power over darkness and evil (Mother 2/EarthBound)

Take the power of PSI back from mankind (Mother).

He is the main antagonist of both Mother/EarthBound Beginnings and Mother 2/EarthBound, and the posthumous antagonist of Mother 3. Known as the "Universal Cosmic Destroyer" or the "Embodiment of Evil", he is an alien conqueror who wields an incredible psychic power, which would later be called PSI.

Giygas' display vastly differs from both games. In the first game, he appears as an alien warlord who follows the orders of his people, and in the second game, he has become an irrational being of pure darkness and evil who lost his own mind and body because of his enormous power. The reason for this drastic change of character is never fully explained. However, due to the far bigger impact it made on gamers, Giygas's character in EarthBound is much more well-known than his former self.

In Mother/Earthbound Beginnings, he is a thin white alien with a pair of horns, no facial features, except for upturned, black eyes, tentacles for limbs and a long tail. He is inside a container and seems to be floating inside it. The container is filled with a liquid as evidenced by the bubbles, inside it. The container is also surrounded by pale grey appendages, with two red lights that are surrounded by red appendages, one being on the left and the other on the right. The reflection on the left side of the container is white, but blue on the right side.

In Mother 2/EarthBound, when Giygas first appears, he is inside a organic-looking machine which is the Devil's machine, with his essence being contained at the very end of it. At that very end, Giygas is inside an eyeball-like container from which Ness' face comes from, later. Giygas' true form is revealed when Porky deactivates the Devil's machine, which reveals Giygas as a twisted, red, screaming face surrounded by a red swirl and darkness, Giygas is constantly distorting himself. After Paula's prayer, Giygas' form changes into multiple deformed faces.

Giygas is an alien with immense psychic powers. In 190X, when Giygas was a small infant, other aliens of his kind abducted a human couple, George and Maria, who took a liking to him and raised him as their son. During this time, George studied the aliens' PSI powers without their permission, culminating with his escape back to Earth.

In the 80 following years, George spread the use of PSI over Earth, against the wishes of the Alien kind. Once he matured, Giygas was tasked by his people to remove PSI from Earth. However, Giygas still felt a strong attachment for his foster parents and particularly for Maria. In the end, he was forced to detach himself from Maria and begin preparations for the invasion of Earth.

In the course of the game, Giygas invades Earth with the ultimate goal to stop the spreading of PSI and take it back from mankind. Giygas uses his own immense PSI powers to spread his influence over Earth, corrupting the world with his mind-controlling powers and his alien henchmen.

In the process of this invasion, Giygas is eventually confronted by Ninten, the great-grandson of Maria and George and PSI wielder, and his companions. Before the two can fight, Giygas offers Ninten to come with him to his home planet, implying that what he really wants most is companionship. Ninten declines this offer though, as he enjoys his life on Earth, and Giygas is forced to attack him.

During the course of the battle, Giygas unleashes undefinably powerful PSI attacks (described by the game with "THE FORM OF GIEGUE'S ATTACK WAS INEXPLICABLE"). He can only be defeated by using a song that Ninten learned from Maria, which she used to sing to Giygas. The song triggers memories of his happy childhood in Giygas, who admits defeat and leaves, telling Ninten that they will meet again.

Between the games' storylines

After his failure in the events of Mother/Earthbound Beginnings, it is unclear what happened to Giygas, though he eventually gained incredible dark powers. These powers were so strong that they destroyed his body and mind, leaving only an all-powerful being of pure darkness and evil.

In this form, Giygas is incapable of coherent speech or thought, and is unable to control his might. His appearance alone cannot be defined nor even conceived by a human mind, should it wield the Power of the Earth, and his existence is beyond rationalization. This makes Giygas very similar to Howard Phillips Lovecraft's Outer Gods, and especially Azathoth, the all-powerful but mindless "Sultan of Daemons". Giygas' essence manifests as a chaotic and bizarre darkness with no beginning or end in sight. He himself appears as a swirling reddish vortex which somehow evokes a twisted, screaming face that continuously warps and distorts itself.

Giygas now manifests as what can only be described as a tempest of pure evil; in Porky Minch's words, "he is the Evil Power". Due to the loss of his mind, Giygas has become completely irrational. Pokey attests that Giygas is not aware of himself nor what he is doing, referring to him as "an all-mighty idiot". Giygas' power is no longer limited to PSI and he gains complete control over darkness, dark magic and everything evil, raising a huge army of monsters and malevolent aliens, including the cybernetic kind called the Starmen.

Giygas returns to Earth many years later in the game Mother 2/EarthBound. Now wielding a vast cosmic power which he is unable to control, Giygas becomes a threat to the existence of the universe itself. In an apocalyptic future set ten years after the beginning of EarthBound, Giygas rules the entire universe, which he engulfed in absolute darkness and reduced to ruins, wiping out nearly every living being. Fortunately, an insectoid alien named Buzz Buzz manages to escape and travels back in time to warn people of the impending catastrophe.

Ness, the game's primary protagonist finds the meteor in which Buzz Buzz has arrived in his era, learning about the evil of Giygas and that he is one of the only four people able to take him down, before having to fight one of the demon's creatures who followed Buzz Buzz. Ness is given the Sound Stone and instructed to record the Eight Melodies, in order to gain the power of the Earth and become strong enough to face Giygas.

In Ness' present-days, Giygas' evil influence quickly starts to spread everywhere on Earth, corrupting both living beings and inanimate things. This leads to Ness' neighbor Pokey, turning into a criminal mastermind, the creation of the Happy Happyist cult and the apparition of many monsters under the command of Giygas that Ness and his comrades have to fight.

Giygas' influence also corrupts Geldegarde Monotoli, the mayor of the big city of Fourside, and hires Pokey to be his advisor. Pokey eventually travels back further into time to meet with Giygas, whom he places into a device called the Devil's Machine, which is able to contain and control his tremendous dark power.

The protagonists eventually gain the Power of the Earth and reach Giygas' time a few months ago. They enter his hideout, where Pokey confronts them inside a spider-like mech, having been appointed as Giygas' assistant. They defeat Pokey, but Pokey shuts the Devil's machine off in retaliation (and then retreats), unleashing Giygas in all his might. Ness and his three companions must then engage the extremely disturbing and nerve-wracking final battle of the game.

The battle against Giygas is very long and difficult. He uses random and unintelligible attacks described by the game as "You cannot grasp the true form of Giygas' attack!", this attack never misses, deals massive damage to everyone in the party, can cause any random status condition, and can often turn into a 1-hit kill, ignoring all defensive stats and HP. His battle dialogue is erratic babbling and meaningless speeches, past his first form no attack can damage him for real. In his incoherent babbling, Giygas repeats Ness' name and words such as "I'm happy" and "I feel good", possibly referring to his desire for companionship and his offer to become friends with Ninten in Mother/EarthBound Beginnings. He overwhelms the heroes until Paula calls out to the people of the Earth to pray.

Every time they do, Giygas gets hurt and turns into a new form containing many times his first form. The combined prayers reach Giygas and exploit his weakness, which similarly to the previous game turns out to be human emotions. What Giygas has become is then destroyed for good and fades into nothingness, erasing his apocalyptic future. Ness and his companions then return to Earth and their human bodies.

Shigesato Itoi has stated that his inspiration for Giygas' speech - but not the inspiration for Giygas himself - in EarthBound came from a traumatic childhood experience where he accidentally walked into an adult movie theater and caught a glimpse of a rape scene in the 1957 film "The Military Policeman and the Dismembered Beauty" (憲兵とバラバラ死美人 "Kenpei to Barabara Shibijin"). In actuality, there was no rape scene in this film, instead a murder scene. As Itoi was a child at the time, he has stated his lasting memory of this experience is fuzzy at best. 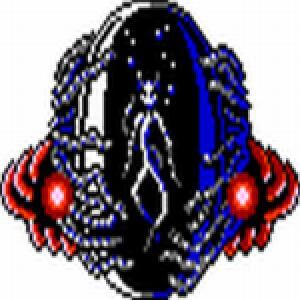 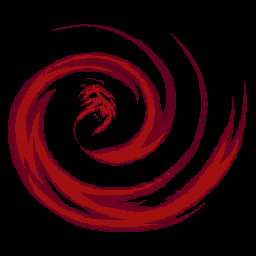 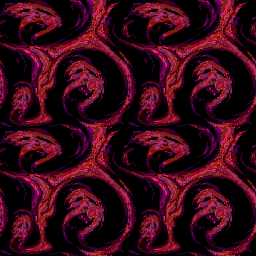 The Devil's Machine.
Add a photo to this gallery 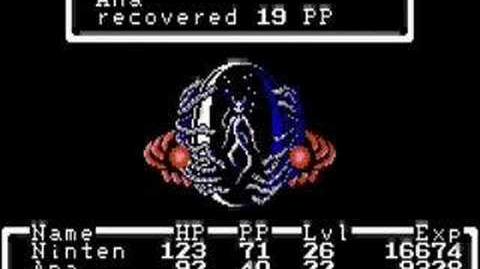 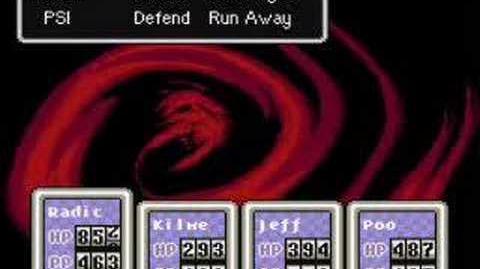 Earthbound - Battle against Giygas Part One
The first part of the fight against Gigyas. 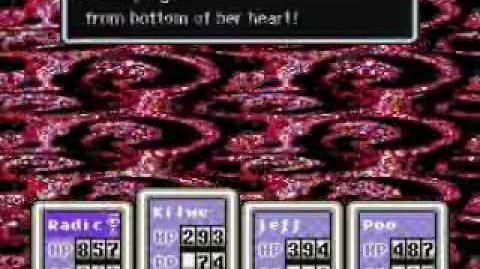 Earthbound - Battle against Giygas Part Two
The second part of the fight against Gigyas. 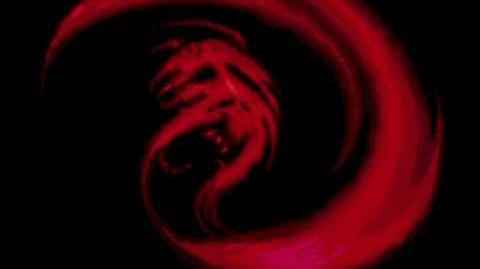 Retrieved from "https://villains.fandom.com/wiki/Giygas?oldid=4204305"
Community content is available under CC-BY-SA unless otherwise noted.