Gizmo is a minor antagonist in the first Fallout game.

He was voiced by Jim Cummings, who also played the Master.

Gizmo is an obese man who runs a casino in Junktown and wants to take over the settlement. To do so, he must kill the mayor and rival of his of Junktown, Killian Darkwater. The Vault Dweller can either use evidence to reveal Gizmo's intentions to Killian, kill Gizmo himself, or side with Gizmo and assassinate Killian. Such conflicts in which the Vault Dweller can choose between good and evil options, and sometimes somewhere in–between, is a staple of the series.

Although it is clear in the final game that Gizmo is the bad guy and Killian is the good guy, the original version would have subverted this. The ending would have revealed that, had he been allowed to take control, Gizmo would have inadvertently turned Junktown into a flourishing trade center and resort, but for self-serving reasons, while Killian, if he was sided with, would have turned out to be a well-intentioned, yet overzealous tyrant who would eventually run Junktown into the ground. This was changed to making Gizmo solidifiy his power in Junktown, until he finally chokes to death on some iguana on a stick, because it didn't seem black-and-white clear.

However, since Killian taking control of Junktown and turning it into a safe and honest community has been established as canon, the Vault Dweller must have either killed Gizmo or exposed his plans, leading to his arrest. 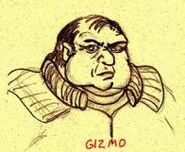