Second-in-command of the H.I.V.E. Five

Gizmo is the secondary antagonist of the Teen Titans animated series.

He was voiced by Lauren Tom (shared with Jinx), who also played Councillor Chang in American Dragon: Jake Long.

Gizmo is a criminal expert of technology who has confronted the Teen Titans on a number of occasions. He is usually affiliated with the H.I.V.E..

Gizmo is a pint-sized boy-knowledgeable with a nasty attitude and an extensive arsenal of high-tech weapons. Along with Jinx and Mammoth, he was a graduate student at the H.I.V.E. Academy, and he and his compatriots were looking to be employed by criminal patron Slade. But first he asked them to pass one final exam: destroy the Teen Titans. The three criminals took over Titans Tower and evicted the Titans, but in turn were ultimately defeated by them. During their altercation, Gizmo temporarily took over Cyborg's systems, causing the latter to develop an intense dislike for the dwarven brainiac. The fact that Gizmo later appropriated Cyborg's newly-built T-Car and caused its eventual demolition by the electric villain Overload didn't help matters at all.

Gizmo, along with Cyborg, Robin and Beast Boy as well as a few independent heroes, was later drafted into a competition by the Master of Games, which was only held to increase the Master's personal power. Robin managed to defeat him and liberate the other contestants, and he gave them all a Titans Communicator, making them all Honorary Titans. Gizmo, however, kept this privilege for just about three seconds before Cyborg objected and took the Communicator from him.

Some time later, Cyborg infiltrated the H.I.V.E. Academy as a villainous student named Stone in order to find out about the plans of its then-headmaster, Brother Blood. Unknowingly, Gizmo, Mammoth and Jinx, the latter more intensely, befriended Cyborg, though Gizmo quickly became jealous about his good standing with the headmaster. After the Academy was destroyed by Cyborg, the students scattered and most went freelance. Gizmo, Jinx and Mammoth, however, formed the nucleus of what was to become known as the H.I.V.E. Five, a group of delinquent young superteens.

At some point in between, Gizmo was "persuaded" to aid Cyborg when the Titan was infected with a computer virus accidentally planted into him by Beast Boy. In order to do so, he shrunk down to microscopic size and, accompanied by Beast Boy as an amoeba, entered Cyborg's body to take out the virus from within. In the course of that undertaking, Gizmo tried his best to get rid of Cyborg as well, but Beast Boy's final measure against the virus prevented that and expelled Gizmo from Cyborg's body. After the Titans came under the influence of Mother Mae-Eye, they suffered a humiliating defeat by the hands of the H.I.V.E. Five, but this favor was returned after the Titans had freed themselves of the hag's control, they just sent the pie in which Mother Mae-Eye was imprisoned to the H.I.V.E., who promptly fell under Mae-Eye's spell as well.

Shortly afterwards, Gizmo and his former co-students were recruited by the Brotherhood of Evil, who were attempting to take out all young superheroes worldwide. After an unintentional explanation from Starfire, Gizmo participated in a race held by Ding Dong Daddy for Robin's most prized possession, and even notified a number of other villains about the race in order to raise the stakes for thrills. Gizmo and the other villains, however, were quickly taken down by Red X, with Gizmo being the last to go.

When the Brain executed its plans, Gizmo was sent with Billy Numerous to capture Kole and Gnarrk, but failed. During the final battle against the united Titans in the Brotherhood's base, Gizmo and his H.I.V.E. Five mates were knocked unconscious by a hex from the reformed Jinx while trying to escape, and Kid Flash placed them in the Brotherhood of Evil's freezing machine, taking them out for the rest of the battle. 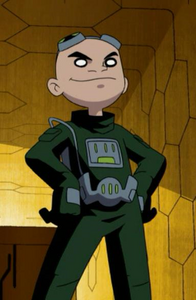 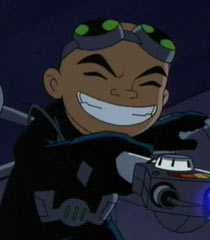