The Gladiator is a minor antagonist and boss in Doom Eternal. He is a large demon and the top warrior of the colosseum in Sentinel Prime.

Before the end of the Golden Age, the colosseum of Sentinel Prime was used as a combat arena for prisoners of the Argenta to test their rights to fight in their army. At some time, a demon was contained by the Hell Priests, a merciless executioner that they use to enact judgment on those they viewed as heretics. Wielding a shield that entombs his tormented soul, the Gladiator remains undefeated in battle, with thousands of souls he has claimed.

With only Deag Grav remaining as the last Hell Priest following the deaths of Nilox and Ranak, he has countless innocents slaughtered by his Gladiator for his amusement. Once Doomguy reaches the colosseum of Sentinel Prime, Grav taunts him about his death being seen as betrayal for the Night Sentinels. He then summons the Gladiator into the arena to take care of Doomguy, eager for one more kill.

For most of the battle, the Gladiator hides behind his impenetrable shield, blocking all of Doomguy's guns. When the eyes on the shield glow green, it means the Gladiator is about to strike. Avoid his flail by dashing away and quickly shoot him before he puts his shield back up. Shooting him in the head staggers him enough for Doomguy to deal a mighty punch that takes off more of the Gladiator's healthbar. He can also shoot out a reflection of his shield. Once his health is down enough, Doomguy stabs the shield in its eyes, destroying it.

Enraged, the Gladiator grabs a second flail. Although defenseless without a shield, he is much faster and aggressive. Like in the first phase, his eye flashes green when he is about to strike. He is also able to whip his flail in a circle, deflecting all attacks, and even creates a "forcefield" around Doomguy that shoots a wave pattern that Doomguy can jump or duck under to avoid. Once his healthbar goes down, Doomguy can deliver a Glory Kill that occurs by first punching the Gladiator down, making him drop his flails. Doomguy then grabs one of them and smashes it into the Gladiator's head. Without his soul to revive him, the Gladiator is dead for good. Doomguy also obtains a medallion from the Gladiator's corpse, which he uses to neutralize Grav's soul after blasting his head off. 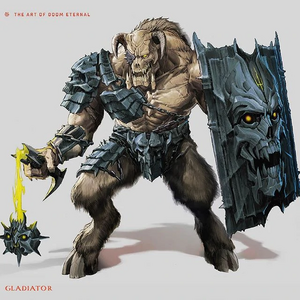 Concept art of the Gladiator. 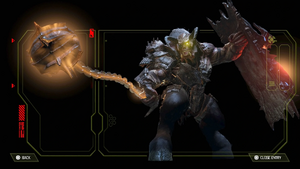 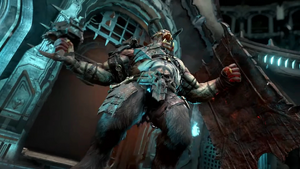 The Gladiator entering the arena. 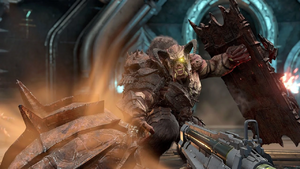 The Gladiator throwing his flail at Doomguy. 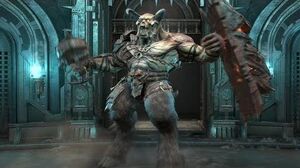