To take over all of Las Pegasus (failed).

Gladmane is the main antagonist of the My Little Pony: Friendship is Magic episode "Viva Las Pegasus".

He was voiced by Jim Byrnes.

Gladmane is an earth pony with a blue coat, lime-green eyes and a silver mane and tail. He wears a blue tuxedo with a sparkling orange bow tie and a sparkling light blue cape. His cutie mark consists three shining bits.

At first glance, Gladmane appears as a friendly stallion who only wishes to give ponies the entertainment they crave and for everypony in his employ to get along. In reality, however, he is really a heartless con artist who is willing to destroy the friendships of his employees just to keep his business booming. He is also quite ambitious, having plans to take control of all of Las Pegasus with this same strategy. Despite this, his greedy and heartless nature lead him to get exposed to the entire public as Applejack and Fluttershy secretly turned on the intercom in his office to get him to reveal his true nature to everyone he deceived.

He also speaks with the same mannerisms as Elvis, right down to the signature chuckle.

In the episode, Applejack and Fluttershy are sent by the Cutie Map to Las Pegasus in order to solve a friendship problem. While there, they arrive to a resort known as the Ponet Fantastique, where Gladmane himself greets them while recognizing them as Princess Twilight's friends. Gladmane gives them a tour of his hotel, showing them his many employees who think very highly of him.

At first, it seems that everypony is getting along just fine. However, they then discover that Flim and Flam are also working at the hotel, but have been arguing ever since. Fluttershy assumes that they may be the friendship problem that they are looking for. But Applejack, due to her past with them, refuses to believe it, and goes to search for another problem. They soon learn that the other employees have been arguing the same way, and according to what Fluttershy heard from the animals, it was Gladmane who instigated these fights. They deduce that Gladmane purposely makes everyone argue, so that they would believe that he is their only friend and continue to make money for him.

Reluctantly, Applejack agrees to help Flim and Flam reconcile so that they can help expose Gladmane. At first, they disguise Fluttershy as "Impossibly Rich" and trick him into confessing over the intercom, but he sees right through the disguise. Applejack and Fluttershy then confront him in his office, and Gladmane gloats about his duplicity, unaware that Fluttershy was holding down the button to his intercom, exposing him to all his employees, who immediately leave him in a huff. Ruined and humiliated, Gladmane gallops out of his office in anxiety. 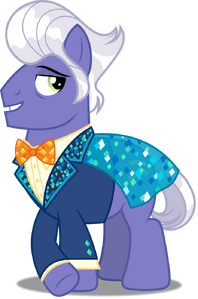 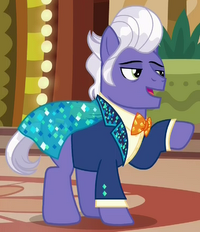 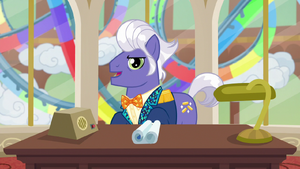 Gladmane in front of his desk.