She was created by the legendary British animator David Firth.

Glass Mother starts off by forcing Salad Fingers to give her a bowl of food. Salad Fingers does as he is told, but when he tries to hand her the bowl, his "Glass Brother" blocks the way, accusing him of trying to have their mother starve to which Glass Mother states that starving would be merciful rather than watching the terrible display. She then has Salad Fingers poison himself by making a disgusting soup, ignoring Salad Fingers' hesitation of the inedible slop making his stomach hurt and giving him fevers. When Glass Brother kidnaps Hubert Cumberdale (The Real Boy) and takes him into the Mirror World, the Glass Mother decides to use Hubert as a broom. 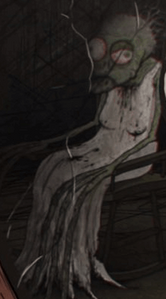 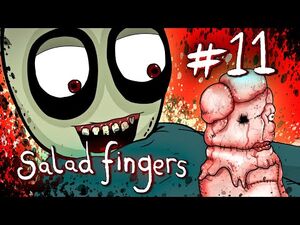