Creating Cephalons (during the Orokin age)

Force Shigg, Vondu, Gral and Cutter to create a transmitter to increase his range (succeeded).

Establish his ideal of order in the Origin System (ongoing).

Nihil, or better known under the nickname "Glassmaker", is a minor yet pivotal antagonist in the MMO third person shooter Warframe. He acts as the titular antagonist of the ongoing third Nightwave series.

He is a mysterious Cephalon responsible for turning people across the Origin System into glass, occasionally opening rifts that turn nearby creatures into "Cephalite" minions to attack and stop the Tenno from interfering in his work.

Episode 2 reveals him to have once been an Orokin and the creator of the Cephalons, AI servants made from the minds and personalities of living people.

He is voiced by Ryan Laughton.

Nihil's appearance is currently unknown. As a Cephalon, he possesses no physical form, though Cephalons are usually represented by geometrical constructs. It is likely that his looks similar to his emblem, as is the case with most other Cephalons encountered in the game.

At the end of every investigation, a piece of what is likely a picture of Nihil during his days as a human can be seen when collecting the final piece of evidence. Nihil seems to have had blue skin similar to the Orokin Ballas and worn brown clothing similar to a japanese yukata and a thin, triangular golden necklace.

From what little could be gathered from his actions and the three times he's been heard, Nihil appears to be a devoted follower of the ancient Orokin laws. He seems to judge his victims based on transgressions against the laws of the long dead empire, regardless of whether their intentions were noble or selfish. By his own admission, he finds chaos to be unsettling and as Episode 3 reveals, considers it a disease that spreads if people aren't vigilant enough. To keep order intact, he turns those who stray from their respective society's established way of living into glass, to serve as his agents of order and as eternal reminders to vigilance.

The Glassmaker first made his presence known to the Origin System with his murder of Shigg, an Ostron from the village Cetus on Earth, turning him into a glass statue with an expression of abstract agony. Nightwave host Nora Night managed to secure a digital copy of the crime-scene and gave the Tenno access to figure out who the Glassmaker is and what he is planning.

Shigg was one of the Ostrons partaking in the harvest of the Orokin tower that lends them protection and their resources, but secretly took some for himself to sell on the black market. A friend of his eventually noticed and called him out on it, reminding him that he had been sharing everything he had with Shigg since they were kids and that he should come clean to village chief Konzu. The Glassmaker got to him first. After investigating the crime-scene and using "Cephalite Resonances" collected from his minions on the field on the glass corpse, the Tenno are able to enter the Glassmaker's datascape, a Cephalon's personal domain. Glassmaker explains that he punished Shigg for betraying his own, calling him a "vile necrocapitalist" in clear violation of the 401st and 632nd legem. Something Nora Night found odd, since "legem" is the Orokin word for law.

Glassmaker later claimed another victim, a Corpus crewman called Bak Vondu. Vondu was one of Shigg's customers, but found himself under suspicion when Shigg tried to sell to too many customers at once. Evidence collected at the crime-scene showed that Vondu was uncharacteristically altruistic for a Corpus, and had been helping refugees and debt-slaves in secret. Back in the datascape, Glassmaker laments how the self-interest demanded by Corpus doctrine had led Vondu to cause chaos in the system.

After leaving the datascape, Nora informs the Tenno that she contacted some of her sources after hearing the Glassmaker use the word "legem", and is certain to have figured out his identity. He used to be an Orokin called Nihil, who developed the Cephalons as punishment in the form of eternal servitude for the Orokin. With the use of a transmitter created by Vondu, Nora suspects Nihil is about to expand the number of his victims drastically.

Nihil strikes once again, this time killing Gral, a disgraced Grineer soldier who made an abandoned Grineer outpost his home. He was the sole survivor of a colonial killsquad, which he reported to have been wiped out in the confusion of a crossfire. His superiors questioned his report and sent him to Saturn Five for reconditioning and a demotion to a lowly maintenance position. Gral started to ponder on his purpose in life, comparing his time in the squadron as big killing small. He was born big but now he was small, which seemed to have caused him to develop sympathy for those he previously hunted. He started reading into non-Grineer philosophies, which he had to do in secret as it would've gotten him killed for treason. Gral decided to turn a new leaf and become an agent for the Solaris United whisperer network, using his new knowledge in engineering to spy on troop transmissions and warn others from impending Grineer attacks.

This insubordination ultimately cost him his life, as Nihil considered his feelings of guilt responsible for bringing chaos into Grineer order. By turning him into a glass statue, Gral became an agent of order instead of chaos. With the Tenno disrupting his effort for the third time in a row, Nihil's patience has run dry and he now considers them to be a chaotic infection just like the others. Outside the datascape, Nora gives her respects to the brave Grineer before comparing Nihil's single-minded pursuit of order to something following programming instead of a person. At the beginning of the episode Nora also commented that as a child, her grandmother would warn her that if she didn't behave herself Nihil would come and "put her in a bottle".

Nihil's newest victim was a member of the Solaris United whisperer network called Cutter, but something about this one was different. Nora noted that unlike the others, who were taken quickly, Nihil seemed to have taken his time with him as if he had let Cutter speak first. Cutter was the one Gral was trying to contact, but what he didn't know was that Cutter was not aligned with Solaris at all. In fact, he was actively working against them. Cutter didn't mind the Corpus, thought they had it good under them all things considered. His parents disagreed. They joined Solaris United and when Nef Anyo sent the massive Exploiter Orb to destroy their base in Fortuna's Deck 12, his parents were among the casualites, leaving him with their debt. He blamed Solaris United for what happened, suspected that their leader knew Deck 12 was a risk but sent them all there anyways. And so he decided to take a little revenge working as a spy for Anyo, identifying Solaris operatives and selling them out.

However, Nihil discovering Cutter's doings was no accident. None of these four victims were. Cutter was not just working for Anyo as a spy, he was also working for Nihil and likely unbeknownst to them, so were the others. Nihil's reach is limited, he can only be in one place at a time, but not for much longer. He had them create a transmitter for him with which he could expand his reach throughout the entire Origin System. Shigg designed the transmitter, Vondu built it and Gral had the encrypted access codes to make its range as wide as possible. When it came time for Cutter to die, Nihil considered sparing him. His victims were all traitors in some fashion, but Cutter never truly belonged to Solaris United. But for all the pride Cutter had in his words, he ultimately begged in the end and Nihil decided against mercy.

Within the datascape, Nihil questioned the Tenno's opposition to him. They all fought for justice, but how do the Tenno want to fight for justice if Nihil has to glass them all? It didn't matter. Cutter and the others had helped him adapt to the new technology and now he had everything he needed. Amplified by the transmitter, no longer would he have to judge one criminal at a time. He could be everywhere at once and the Tenno would make fine examples for the order he would establish. As for Nora, he had something special in mind for her. She would retain her position as speaker, but instead of her Nightwave radio broadcasts she would serve as his voice of truth and order, a sermon that would never end. Fully aware of what he had made her into.

The Glassmaker bid the Tenno farewell, promising that their next meeting would be their last. Nora agreed. 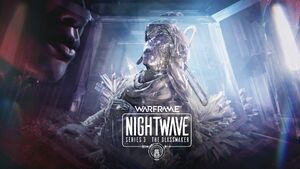 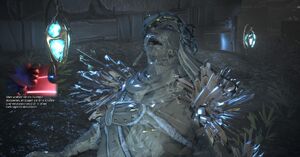 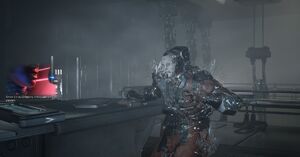 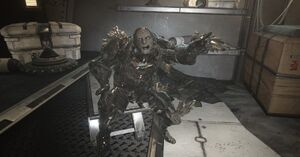 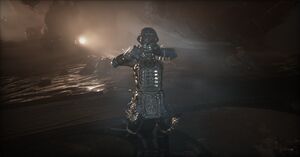 Cutter, the Glassmaker's fourth victim.
Add a photo to this gallery

Retrieved from "https://villains.fandom.com/wiki/Glassmaker?oldid=3910287"
Community content is available under CC-BY-SA unless otherwise noted.