Terrorize the residents of the Crown Tundra (formerly).

Glastrier and Spectrier (Blizzapos and Wraithpos in Japanese) are Legendary Ice-type and Ghost-type (respectively) Pokémon introduced in Generation VIII. They serve as the main antagonists of "The Crown Tundra" DLC for Pokémon Sword and Pokémon Shield.

Glastrier resembles a white horse with blank white eyes and ice covering its body, which it wears for armor. Ice covers its legs, tail, and half of its face. Its mane consists of four icicles.

Glastrier has the ability Chilling Neigh, which raises its Attack every time it defeats another Pokémon in battle.

Spectrier resembles a black horse with purple and pink around its body. Its tail is pink and cloud-like. Its purple legs slightly elevate from the ground, with only its hooves touching the ground. The back hooves emit a purple smoke. Its mane is long and purple, with a single pink part draping over its muzzle. Only its left eye can be seen, which is closed under pink eyelashes.

Spectrier has the ability Grim Neigh, which raises its Special Attack every time it defeats another Pokémon in battle.

Long ago, two horses caused trouble to the citizens of the Crown Tundra due to them entering their territory, causing a famine by eating away at their crops. Glastrier used its ice strength to forcefully take what it wanted through the days while Spectrier haunted the nights as it fed off energy of sleeping creatures. That was until Calyrex, the King of Bountiful Harvests, tamed the horses and soothed them of their wrath, using them as its noble steeds. However, as the story of Calyrex was reduced to a legend, its powers were weakened when it lost power over Glastrier and Spectrier, causing the famine caused by the horses to continue once more.

In the main story, when the player comes to the Crown Tundra, Chairman Rose's brother Peony tasks the player with completing several challenges involving the Legendary Pokémon found in the area, one of which is to learn the story of Calyrex. After repairing the statue of Calyrex in Freezington by obtaining its crown (which was being used by Peony as a pillow) does the real Calyrex reveal itself. Using psychic powers by possessing Peony, Calyrex tells the player that because it lost its steed, its ability to control the crops has weakened and tasks the player with assistance in tracking them. When carrots are found to be the solution, the player is given the option to grow them in the Snowside Slope for Glastrier or the Old Cemetery for Spectrier.

After growing an Iceroot Carrot or a Shadowroot Carrot, Glastrier or Spectrier will appear depending on which garden was chosen and runs towards Freezington, where it terrorizes the locals by attacking their last carrot farm. The player battles it in order to calm it, but it their efforts only make the horse angrier. It notices the residents to the side and charges towards them, but Calyrex is able to link a psychological connection to the horse, causing it to flee. From the carnage does the horse leave a tuft of its hair behind.

With the tuft of hair and a Radiant Petal produced by Calyrex, Peony crafts the Reins of Unity. At the Crown Shrine, Calyrex's old palace, the player places the carrot in a basket in the steed's old staple as bait. Once the horse shows up and eats the carrot, Calyrex jumps on top of it and uses the reins to combine with it. After a brief struggle, Calyrex successfully calms the horse. The player can then battle and catch Calyrex and the horse, where the Reins of Unity can be used on Calyrex to combine or separate it from Glastrier or Spectrier. When combined, Calyrex's ability becomes As One, merging its innate Unnerve ability with Chilling Neigh (as Ice Rider) and Grim Neigh (as Spectral Rider). 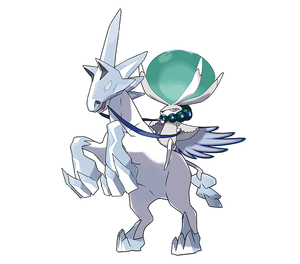 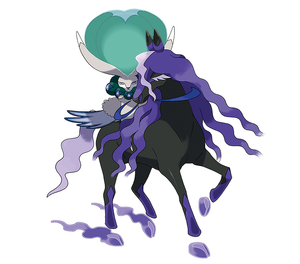