Kidnapping heroes to be used in his entertainment sport.
Eliminating heroes who performed badly.
Torturing Ratchet.

Recruit heroes to be used in DreadZone (ongoing).

Getting higher ratings and selling merchandise by any means.
Eliminate Ratchet & Clank (failed).

Gleeman Vox is the main antagonist of Ratchet: Deadlocked. Vox was a Slademan, and the founder and owner of Vox Industries, the Vox Network and several other business ventures within the lawless Shadow Sector of the Solana Galaxy. One of his most notable achievements was DreadZone, an illegal combat sport that pitted heroes across the universe against one another for adoration of trillions of fans.

He was voiced by Michael Bell, who also played Lawrence.

Prior to the events of Deadlocked, Gleeman Vox had made his fortune in several business ventures he found in the Shadow Sector, such as Vox Industries, the Vox Network, Vox Pharmaceuticals and Vox Airways.

With DreadZone up and running, with DreadZone Battlecourses set up across the Shadow Sector, and Vox's personal army kidnapping superheroes across the universe. Gleeman Vox later appointed Ace Hardlight as leader of the Exterminators as he became the number one contestant on DreadZone, as well as breeding, training, and grooming the Eviscerator for stardom as an Exterminator as well. As the years went by, DreadZone earned 6 trillion fans across four galaxies, including the Solana Galaxy, the Bogon Galaxy and the Polaris Galaxy, which funnelled in billions of bolts to Vox as well as high ratings. Throughout his rise to power, he was accompanied by his loyal pet Slugha.

Seeing yet another hero to add to his long list of DreadZone contestants, Gleeman Vox ordered his troops to set up a distress beacon in Quadrant J0713 to capture famed galactic hero Ratchet. Naturally, Ratchet took the bait when the Starship Phoenix entered the quadrant, where it was promptly ambushed by an Interplanetary Transport carrying Vox's forces.

Meanwhile at the DreadZone Station, in a tower overlooking the Battledome, Gleeman Vox watched the action occurring in the Battledome with his pet, Slugha. Vox's viewing of DreadZone was interrupted by an Executioner in charge of the raid, who informed Vox they had successfully captured Ratchet. Gleeman Vox was greatly pleased by the news while he rubbed his pet's chin affectionally. The Executioner informed Vox that they had also captured two strays in the process of kidnapping Ratchet, and asked Vox whether they should be executed or not, causing Slugha to shake her head up and down in approval of the Executioner's suggestion. Vox however disagreed, instructing the Executioner to put Deadlock Collars on the strays and see if they could "...get some work out of them first."

While Ratchet was completing the qualification course, Gleeman Vox appeared to "welcome" him to DreadZone. He assured Ratchet no one would come to rescue or that he himself wouldn't be able to escape. Vox then informed Ratchet that he was now a celebrity gladiator on the greatest holovision show the galaxy had ever known, battling for screaming fans across the Shadow Sector and beyond. Vox claimed Ratchet would likely be dead by tomorrow, but if he fought well and managed to survive, he would earn his freedom. Vox sarcastically wished Ratchet luck at the task that lie ahead, claiming they'd be watching him, laughing manically before his screen vanished

It was only a matter of time before Ace Hardlight and Ratchet would duel in the Battledome. To the surprise of many, Ace Hardlight was defeated by Ratchet. Afterwards, two DZ Strikers arrived to carry him off toward's Vox's quarters. Upon arriving in Vox's office, Ratchet inquired why Vox had wanted to see him. Vox exclaimed that Ratchet was now the grand champion of DreadZone, claiming the whole galaxy wanted to see the gladiator who had bested Ace Hardlight. Vox insisted his actions were responsible for Ratchet's rise to fame and transforming him from a "...worthless nobody, into the hottest celebrity in the galaxy!" Ratchet was quite shocked at Vox remarks, as he argued that Vox's "News Shows" slandered him every six seconds. Vox claimed those reports were designed to build up Ratchet's "bad boy" image, remarking "And this is thanks I get." Ratchet grew very annoyed by Vox's pettiness, causing Vox to tell Ratchet to stop acting like a baby. Vox then exclaimed he was about to offer Ratchet the opportunity of a lifetime. Vox planned to put Ratchet in charge of a new team of Exterminators, making Ratchet the star of DreadZone. Vox claimed both he and Ratchet could make billions buy selling Ratchet merchandise. Vox insisted that Ratchet would also get record deals, movie rights, reality shows, video game and loads of commercials.

Vox grew quite breathless from all the excitement over the loads of potentials bolts he could make, but much to his surprise, Ratchet declined. Vox couldn't believe what Ratchet was saying, causing Ratchet to respond back that he wasn't Vox's puppet and wouldn't kill other heroes for bolts and fame. Ratchet then insisted that Vox wasn't only corrupt, but borderline stupid. Vox stuttered in anger as he attempt to insult Ratchet, before simply exclaiming Ratchet had signed his own death warrant. Ratchet then asked if he was done here, causing Vox to order his two DZ Strikers to return Ratchet to his containment area.

Ace Hardlight was later disposed by Gleeman Vox, whom later ended up behind bars of the infamous Zordoom Prison of planet Viceron. Vox later made a public address on Vox News to discuss Hardlight's "death." Vox claimed he shared their empathy for the loss of Ace Hardlight, and encouraged DreadZone fans to express their sympathy for Ace by purchasing Ace Hardlight Memorial Actions, which were on sale for only 299 bolts

Death of a Lombax

Much to Vox's surprise, Ratchet with the aid of Merc and Green were able to deactivate the containment fields, allowing escape shuttles filled with heroes and DreadZone fans to escape. Nevertheless, the show wasn't over yet, and Vox and Slugha rushed back toward the DreadZone Station in a giant mech. While Ratchet was talking to Clank, Vox smashed into TV screen that Clank was using to talk to Ratchet, claiming their "melodrama" would cost him viewers. Vox then moved in close with his mech, claiming he'd be waiting for this moment for quite a long time, and he planned to give DreadZone fans the finale they'd been waiting for. He insisted his one act play would be known as "Death of a Lombax!" before maniacally laughing, and setting in motion the massive fight they were about to have.

Although Vox and his pet had managed to survive the destruction of the giant mech, his defeat had made Vox heavily crippled, unable to get up and breathe properly, causing him to wheeze and cough

Ratchet approached the salesman, claiming Vox's game was over, but Vox grabbed a nearby remote, insisting it wasn't time yet, but the end would come soon. With that, Vox pressed a button on the remote and a self-destruct system was immediately reactivated. The DreadZone Station's speakers warned everyone that the station would blow up in a mere 60 seconds. Vox informed Ratchet that all the escape shuttles had fled the station, and Ratchet would die on the DreadZone Station before the eyes of DreadZone fans across the universe. Even in death, Vox would be able to exact his revenge on Ratchet and get the highest ratings he always wanted. Ratchet insisted that while he might not be able to escape the DreadZone Station alive, he would know his actions allowed many heroes to escape the station. Vox scoffed at Ratchet's "...pathetic idealism...", and told him to enjoy it now, because he was going to die anyway.

Gleeman Vox proves himself to be cold, sadistic and obsessed with earning bolts and high ratings. The only other thing he came close to caring about was his pet Slugha, and this care diminished when Vox was willing to let it die in the explosion he planned to set off at the end of the game. 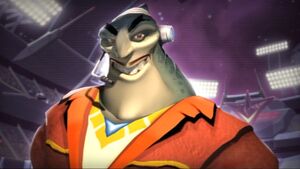 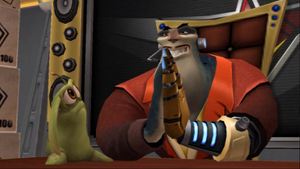 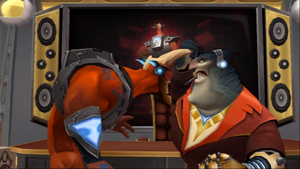 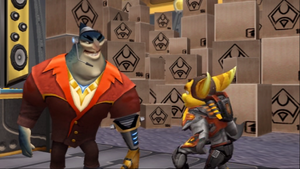 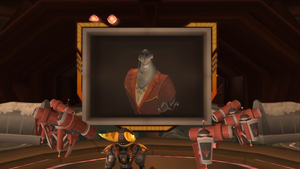 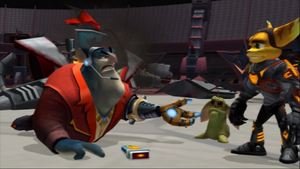 Vox's defeat.
Add a photo to this gallery

Retrieved from "https://villains.fandom.com/wiki/Gleeman_Vox?oldid=4136687"
Community content is available under CC-BY-SA unless otherwise noted.