Selling the Trigger Virus to criminals and terrorists.

Unleash the Trigger Virus in New York city. (succeeded, but then failed)

Glenn Arias is the main antagonist of the CGI film Resident Evil: Vendetta. He is a bio-terrorist and an arms dealer, who took over TRICELL and Neo-Umbrella.

He was voiced by John DeMita, who also played Kars in JoJo's Bizarre Adventure: Battle Tendency.

Glenn Arias is a brilliant merchant, capable biologist who can engineer his own virus strains and an expert in close combat skill, displaying such talents in using a rifle as a blunt weapon to block Chris's knife attack. Glenn Arias is also excellent in unarmed combat, although his skill just wasn't good enough for him to defeat Chris Redfield.

He holds a strong hatred for the U.S. Government for bombing his wedding and killed his family and newly wife, Sarah. He swore revenge on the government by developing the A-Virus and unleashing an apocalypse of zombies as Raccoon City outbreak and Carla did.

During on his wedding day, an unknown government dropped a bomb on him, killing his family and friends, and his wife Sarah. He was along Maria and Diego survived from the explosion, then found an arm of Sarah in the explosion.

When a BSAA agent Chris Redfield is tracking Glenn Arias, a death merchant who is on a mission of vengeance against the government for killing his family and wife at their wedding. Chris and his fellow agents infiltrate a mansion in Mexico, after Kathy White, their undercover source who was following Arias' organization, vanished along with her son, Zack. Inside the mansion, Chris' fellow agents are ambushed by aggressive zombies (Zack included) and death traps, with Chris being the sole survivor and barely making it out alive. Chris then comes face-to-face with Arias outside the mansion and engages him in CQC, only to be swiftly defeated. He then finds out that Kathy has become a zombie, who now obeys Arias. As Arias leaves with his B.O.W. associates, Maria and Diego Gomez, the BSAA arrives just in time to rescue Chris by slaughtering Kathy and the remaining zombie horde with Chris vowing revenge on Arias.

Later, Rebecca was captured by Maria and Diego, Arias intends to make Rebecca his bride as she shares a striking resemblance to his late wife. He develops a new strain of virus that is not affected by the vaccine and injects it to Rebecca. Arias challenge Chris to rescue Rebecca within thirty minutes, which is the time that requires the virus to take full effect. As Arias' associates imitate their attack on New York by releasing the gas form of the virus in vehicles, Leon and Chris' new BSAA team, consisting of DC, Damian and Nadia, destroy the vehicles and contain the virus, although Damian is brutally decapitated by zombie dogs in the process. Chris then infiltrates Arias' safe house, defeats Diego and rescues Rebecca. In the terrace, he is confronted by Arias, and a brutal gun-kata and Close Quarters fight ends with Arias falling through the glass terrace below to his demise. Diego then revealed to be Arias' brother, and they assimilate to form a new Tyrant form. Chris is no match against the Arias-tyrant until Leon joins the fight after working his way through the safe-house, mowing down zombies. With the assistance of DC and Nadia, they manage to trap the tyrant, at which point Chris finishes off the Arias-tyrant with a rocket launcher. They are then able to locate the antidote that Arias kept and cure Rebecca before the thirty minutes is up. 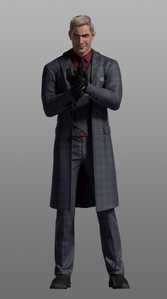 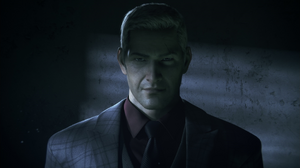 Glenn seen in the trailer. 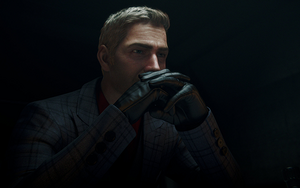 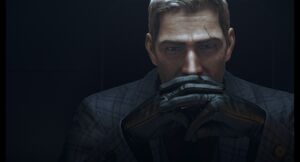 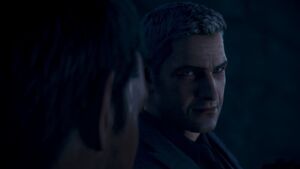 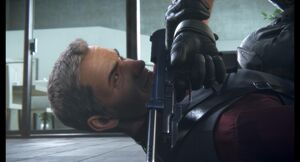 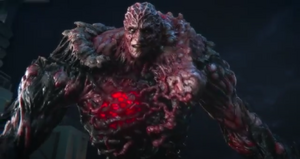