Saying "giggity" after a sexual innuendo or any other mention of sex.

Having sex with women, regardless if they consent or not.
Doing other perverted activities.

Fill the void lost when his true love Cheryl Tiegs left him.
Antagonize Brian Griffin (formerly).
Help Meg Griffin defeat Michael Pulaski.
Kill Jeffery Fecalman to protect his sister Brenda.
Sacrifice himself to Pouncey and turn into the cat lady to save Meg (all succeeded).

Quagmire's creator and voice actor Seth McFarlane describes Quagmire as "an appalling human being who is still caught in the Rat Pack era". Quagmire is obsessed with sex to the point that he engages in every imaginable perversion, including rape, pedophilia, bestiality, incest, and necrophilia.

Despite being a pervert and hypocrite, he has also been shown to have a kinder side. He does whatever it takes to help his friends and protect his sister Brenda, who was often beaten by her abusive boyfriend, Jeffery Fecalman, whom Quagmire hated. Eventually, he was so infuriated by this that he murdered Jeffrey for his abuse against Brenda.

His sexual nature and lust for women is hinted through flashbacks of his life starting from infant stage. It's even hinted that he harbors sexual attraction towards his mother; when Quagmire is seen crying and his mother exposes her chest to breastfeed her son, during which Quagmire stops crying, says "O right!" and suckles from his mother in a lustful way.

His mother Mrs. Quagmire apparently has the same sexual appetite as her own son. He also expresses an incestuous sexual attraction towards his own daughter Anna Lee Quagmire (whom he gave up for adoption as an infant to another married couple) After bidding his daughter goodbye, Glenn openly admits his perverted views about his daughter to Peter, hoping that when she grows up, he would "bump into her in about 18 years", implying he's hoping for physical contact. Peter is disgusted by this and reminds him that that is his only biological daughter he is talking about through incest fantasy. Glenn chuckles and tells Peter that he didn't change like Peter hoped for the better and bids the audience goodnight.

In another episode, Quagmire is one of two finalists of the TV show The Bachelorette, he takes his date home to meet his mother. He tells his mother to stop screaming at him, telling her that if she wants to participate in a three-way with Glenn and the bachelorette, she needs to change her tone after yelling at Glenn about Mittens, their family cat.

Quagmire is an extremely prideful individual, and despite many of the disgusting and perverted acts he has committed, is perfectly willing to chastise others such as Brian for things that he himself has displayed the same ignorance, such as his failure as a father, and when forced to own up for his mistakes, instead chose to blame it all on his past life and refusing to admit that he had some responsibility for the actions in his life.

Quagmire has an extremely perverted and provocative nature, is a user of women, a serial rapist, possible pedophile, necrophile, and zoophile. Throughout the series, Quagmire has been shown to be madly in lust with Lois Griffin. However, all of his attempts to get her attention have failed, usually foiled by Peter and/or Brian. Quagmire is also an antagonist and a supporting character in the later seasons due to his deep hatred towards Brian. His hatred towards Brian has lessened and almost every time they interacted together, they remained neutral to each other. 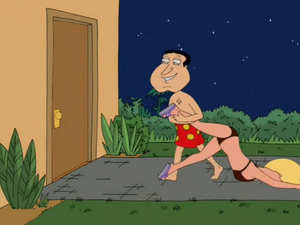 Quagmire roofies and then attempts to rape Brooke. 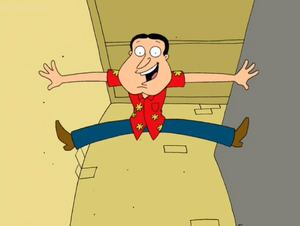 Quagmire peeping in the ladies' room. 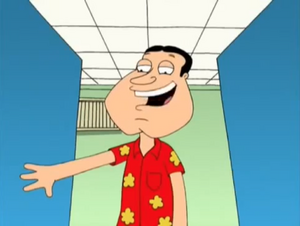 Quagmire claims "jackpot" after finding an teenage girl tied up in the bathroom. 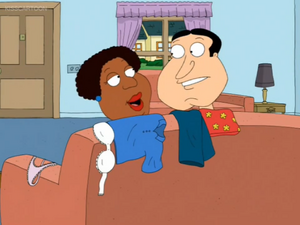 Quagmire has sex with Loretta, while the latter was still married to Cleveland. 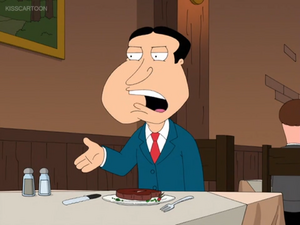 Quagmire explains in great detail why he hates Brian Griffin. 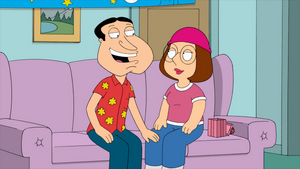 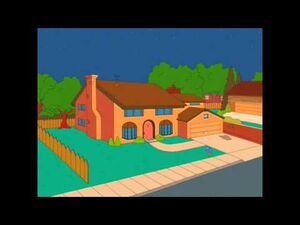 Quagmire gets giggity with marge 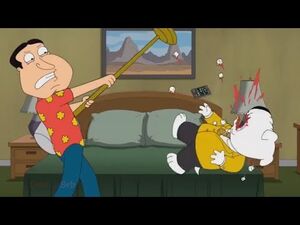