Lore Celica to Henrietta's trap to kill her (failed).

Glenn Radars is a minor, yet pivotal antagonist in Akashic Records of Bastard Magic Instructor. and the secondary antagonist of the side story Memory Records Volume 1 chapter 5, "Heavens, the Lonesome Witch". He was an lonely villager in his town, who eventually befriended a mage named Celica Arfonia, who had a huge impact on her life. However, he is nothing but a Thrall that was created by the Lich, Henrietta Dool, a former member of the Imperial Court Mage Coups.

Glenn was created to get closer to Celica and lore her into Henrietta's trap.

Celica was sent to a village to exterminate the Lich and its Thralls. She was being avoided by everyone in the village, this results to leading many rumors about her, but young boy named Glenn was the only person that made contacted with her, because he admired magicians, especially her. At first she finds him annoying when they meet, but as she starts to bond with him as a result of his persistence to keep visiting and care for her. Celica starts to feel happy with his company and even offering him to stay with her since he doesn't have anyone either.

However, sometime later, Glenn was kidnap, Celica immediately went to save the young boy and cross paths with the Lich with Glenn. She saves the young boy from the Lich, checking on him and happy to see he's okay. While being she was thrilled with happiness, Glenn stabs her with a dagger and backs away from her. As Celica was wounded to the ground, she bewildered why Glenn stab her, its revealed that the true Lich was Henrietta Dool, a former member of the Imperial Court Mage Corps. She tells Celica that Glenn is one of her Thralls and this was her plan for humiliating her. She then tells her she is going humiliate her by having her Thralls rape her until her mind broke and slowly kill her. However, Celica uses her magic "Extinction Ray" which killed both Glenn and Henrietta.

After the event, she still mourned to Glenn and realizes her own loneliness because of him, this even caused her to give up her will to live. But then, she heard a voice in Henrietta's basement, which she founds a boy that resembles Glenn. But boy lost all of his memories by Henrietta's experiments, including his name. With all the villagers dead, Celica decides to adopt the boy and named him "Glenn Radars". 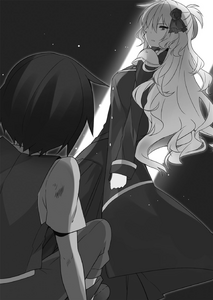 Glenn and Celica meeting for the first time.
Add a photo to this gallery
Retrieved from "https://villains.fandom.com/wiki/Glenn_Radars_(Thrall)?oldid=3546230"
Community content is available under CC-BY-SA unless otherwise noted.