Glenn Talbot is one of the main antagonists of the 2008 video game adaptation of The Incredible Hulk film. Unlike other characterizations, who are merely a jealous love rival, this incarnation of Talbot is nothing but a madman who is obsessed with killing the Hulk.

He was voiced by Michael Gannon.

Glenn Talbot first appears in the game when he discusses the plans of capturing the Hulk with Emil Blonsky. He is seemingly against capturing Bruce Banner alive out of the risk of his soldiers getting killed (though it is later made clear he simply wants to kill the Hulk due to his obsession with him). Blonsky wants him alive for information on the Hulk, but Talbot objects and decides all they need to do is kill him and then perform an autopsy - which would give them all the information they need. Blonsky agrees.

In order to kill the Hulk, Talbot has his soldiers, both the humans and the robots, attack him New York CIty, while disregarding the possibility of innocent civilians dying when the topic is brought up by one of his men - also deciding to put the blame on the Hulk if any unwanted destruction is caused by his soldiers. Once the Hulk beats them, Talbot shows just about the same amount of concern when firing missiles at him later in the game while the monster is located at a civilian area - resulting in several buildings getting destroyed. The Hulk draws in the attention of some choppers in order to expose Talbot for who he is, but Talbot has them shot down. Fortunately Hulk survives due to the guidance of Rick Jones - and is able to stop the missile strike by destroying the targeting computer.

Talbot manages to track the Hulk down a second time and shoots more missiles at him - so both Hulk and Rick Jones try to track him down to his base. However, it is later revealed that the second attack was meant to distract Hulk and he captures Rick. Rick informs Bruce of this through their communicator and Bruce goes after him as the Hulk - tracking Rick down to Talbot's base as he tries to fight off his soldiers to get to him. He manages to rescue Rick.

Later in the game, Talbot has Betty Ross, Bruce Banner's love interest, captured and put in a cage in order to kill the Hulk. When Hulk rescues her, both General Ross and his soldiers (once they find out Betty is Ross' daughter) corner Talbot in his hideout to have him arrested once Ross finds out what he did. However, Talbot puts on Hulkbuster armor and kills his soldiers. He then goes on a rampage throughout New York city in the suit and murders several civilians, as well as more of Ross' men, to get to the Hulk. As the two fight, the Hulk overpowers Talbot - but Talbot reveals that he had detonated his suit' s nuclear reactor so it would go explode and kill the Hulk - as well as the whole city and its civilians. The Hulk throws him into the air away from the city right before it explodes and kills Talbot.

When he is first introduced, Glenn Talbot seems to be a well meaning major who cares about the safety of his soldiers. But in actuality, he was a madman who would stop at nothing to kill Hulk even if it meant endangering the lives of innocents. He also doesn't tolerate having his authority questioned. A good example of this is when he gives the order to Blonksy to fire missiles at the Hulk in a civilian area, Blonsky is hesitant due to the harm it could cause to others. However Talbot simply responds with "just do it", not going any further than that. He was so obsessed with killing the Hulk he was willing to kill himself as well as a whole city by detonating the Hulkbuster armor he was wearing. Despite his lack of brute strength and other superhuman powers, Glenn Talbot proved to be even more monstrous than the Hulk himself. 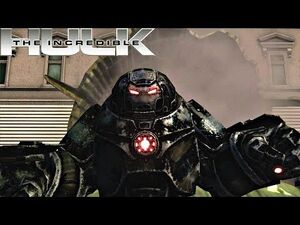