Merge with the player's consciousness and escape the game (partially succeeded).

Glitchtrap, also known as Malhare, is a major antagonist in the Five Nights at Freddy's franchise.

He is a supernatural malware within the game that takes the form of a humanoid in a rabbit costume and watches the player as they progress. He intends to perform a digital consciousness transfer with the player to escape into the real world. He is the arch-nemesis of Tape Girl and the master of Vanny.

He is also the digitized soul of serial killer William Afton, although it is debatable if he is just a copy or the soul itself. The Princess Quest minigame in the mobile port heavily implies, if not outright confirms the latter.

Glitchtrap first appears near a doorway in the main hub after collecting one the cassette tapes hidden throughout the game. By finding more tapes, Glitchtrap will get closer to the player and become progressively more solid. The tapes imply that Glitchtrap first entered The Freddy Fazbear Virtual Experience after old animatronic circuit boards, one of them being Springtrap, even though he was not part of it as revealed in the E-Mails of Special Delivery was scanned to create advanced AI systems. He began to greatly unnerve beta testers by watching them play, causing one of them to document what they knew about Glitchtrap in hopes another development team could find a way to eliminate it, while nicknaming it "the Anomaly".

After collecting all four keys in the Corn Maze level a fifth purple glitching and rusty key will appear somewhere in the map. This key opens an underground shack in the center of the maze with a white bunny mask inside. This mask is then unlocked in the prize corner. Wearing the white bunny mask while looking at the Glitchtrap plush will cause a female voice to tell him that she was able to finish the preparations he gave her with no problems, no one suspects anything about their plans and that she made a suit for him, hoping that he likes it. She finishes by assuring him that everything will be ready for the "fun".

Glitchtrap is almost entirely removed from the game due to the absence of tapes to collect, only appearing twice: in the Pizza Party level and as the main antagonist of the secret minigame Princess Quest. Throughout the minigame, various types of glitchy green rabbits try to attack the titular princess as she explores a castle.

At the very end of the minigame, locked behind a large door that needs to be unlocked with a purple key, the Princess encounters a gigantic, purple and glitched rabbit. It says something to her in an unreadable speech bubble and with a strange noise, then envelops her with shadowy tendrils as the screen becomes increasingly glitched, followed by the game crashing.

Fans quickly found the original audio file and discovered that the rabbit says "I always come back. Let me out."

Glitchtrap, due to driving Vanny inside, made her gain full control over the Fazbear Funtime Service by tricking the rest of the employees, allowing the animatronics in the service to become hostile, and presumably add Springtrap to the Service. He might even be the virus that the employees were fighting.

Glitchtrap will return in the upcoming game as the one giving Vanny her orders, thanks to which he will either be the main or overarching antagonist. Furthermore, a claw that looks similar to Scraptrap's right arm surrounded by purple light appears at the end of the gameplay trailer, which suggests that he will gain physical form at some point.

Glitchtrap appears as a humanoid wearing a golden yellow anthropomorphic rabbit costume, with a perpetually smiling face, two black buttons on his chest, a big purple bow-tie, and a purple vest decorated with star patterns. While in his incomplete form, he looks just the same as his normal form, but is transparent, surrounded by a green aura, and has glowing purple eyes.

In the Princess Quest minigame, Glitchtrap appears as a massive amalgamation of shadowy rabbits with glowing purple eyes and mouths and a larger, smiling main head with what appears to be purple tears running down his eyes. This may or may not be his true form. 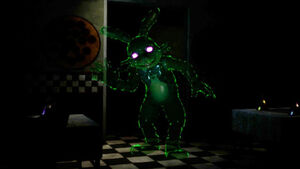 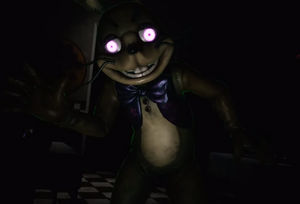 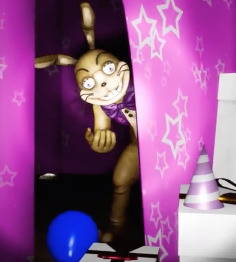 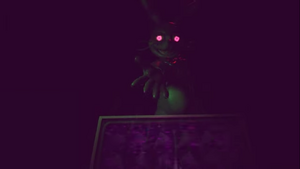 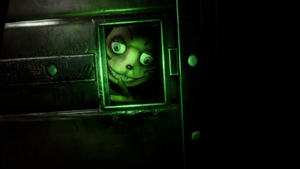 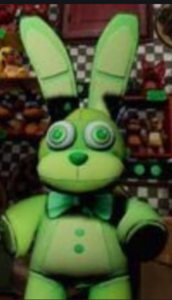 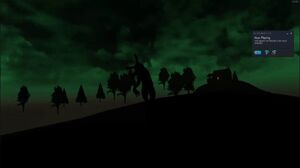 A close-up of Glitchtrap dancing in the Curse of Dreadbear DLC. 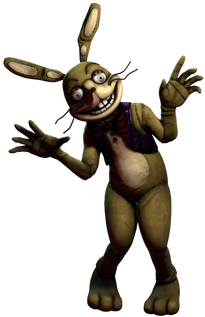 Glitchtrap in a more casual pose. 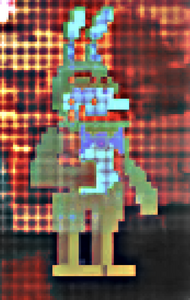 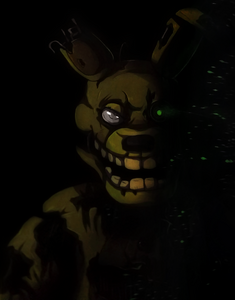 A piece of artwork at the end of The Freddy Files: Updated Edition, possibly related to Glitchtrap.

Glitchtrap in the Princess Quest minigame in the mobile port for Help Wanted. 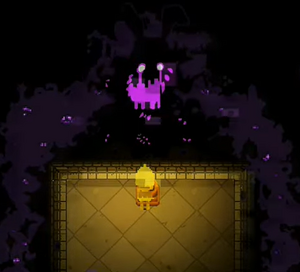 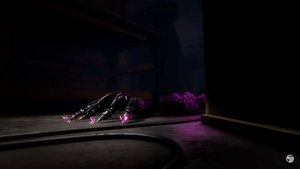 A purple-glowing metallic claw at the end of the gameplay trailer for Five Nights at Freddy's: Security Breach, presumably belonging to Glitchtrap's physical form.