Globulous Maximus is the main antagonist of the game SpongeBob SquarePants featuring Nicktoons: Globs of Doom.

He was voiced by Dee Bradley Baker, who also did the voice of Bubble Bass.

Globulous has two forms in the game: his ball form and his Sponge-Glob form.

In his ball form, he takes the form of a giant orange booger with several eyes around him and two giant, floating arms. As he redeems himself, he transforms into Sponge-Glob, his second form, who looks similar to SpongeBob, except he is orange, gigantic, and has only one eye.

At the beginning of time, he was created by the "big sneeze" (a parody of the Big Bang) and was outraged by his appearance. To take out his frustration, he wanted to destroy other worlds by creating minions known as the Morphoids.

He first sent the Morphoids to Bikini Bottom, where they plagued Squidward and many Bikini Bottomites in front of SpongeBob. Jimmy Neutron appeared from a portal and rescued SpongeBob and Patrick from the Morphoids. They retreated to volcano island, where SpongeBob and Patrick learned that they were not the only ones whose homes were being ravaged. They met Danny Phantom, Zim, and Tak, along with their enemies: Technus, Plankton, Beautiful Gorgeous, Dib, and Tlaloc, who came to team up with them. Shelly, the wise old hermit crab, appeared before them and showed them a machine that Jimmy enhanced, giving them technology to help them fight the Morphoids.

As Beautiful Gorgeous and Spongebob made their way towards Bikini Bottom, they ran into Bubble Bass eating Krabby Patties, seeing how he loves them. As he was about to eat his last Krabby Patty, it was plagued by the Morphoid goo, turning him gigantic, and was goo-covered once he ate it; he then made his way to the Krusty Krab. SpongeBob eventually caught up to Bubble Bass, and once at the Krusty Krab, he quickly made Krabby Patties to stop Bubble Bass from attacking the restaurant, while he and Tlaloc fought the Morphoids. Bubble Bass became sick after eating too many Krabby Patties, and began to regurgitate orange goo on SpongeBob. Strangely, the orange goo had no effect on him; Jimmy hypothesized that SpongeBob was immune to the effects, due to his sponge-like characteristics.

Later, back at Volcano Island, SpongeBob began to speak sinisterly to himself. This was Globulous trying to come in contact with the Nicktoon characters by speaking through SpongeBob. After that, Shelly went to show them a spaceship called the Vessel of Portentia that was missing four pieces. in order to complete it, the heroes would need to search Zim's Town, Amity Park, Retroville, and Pupununu for the pieces.

In Invader Zim's world, GIR was playing with what he thought was a Taco, but it was really one of the four pieces. Zim yelled at him to hand it over as they needed it. However, before GIR could, a Morphoid meteor fell upon him, putting him under Globulous' control. He then ran away with the Taco and later fused with Zim's house. As he was defeated by Technus and Beautiful Gorgeous, orange goo spilled out of the house and over SpongeBob.

After gathering the first piece, SpongeBob began to congratulate everyone but was suddenly corrupted by Globulous Maximus again. Jimmy realized that SpongeBob's absorption of the goo was creating a wave link between him and Globulous Maximus. Luckily, Patrick was able to break it by making SpongeBob smell a Krabby Patty.

As they were searching for the next piece in Amity Park, Ghost Dog was turned into a three-headed monster, who dug up the next piece and ran away with it. Once the heroes defeated Ghost Dog, it ran into a wall, and Spongebob knew what would happen next.

Once they returned to the volcano, Globulous once again took over SpongeBob, revealing his name. Patrick held up a Krabby Patty to break him free from his control, but this time, it had no effect. So, Technus had to twitch his nose. As he was freed, Jimmy asked him what he saw. SpongeBob explained to everyone that Globulous Maximus is a giant ball of goo that is older than time itself.

In Retroville, Jimmy's girl eating plant was causing havoc, as it ate the third piece and was waving Cindy Vortex in its arm. In it's defeat, the evil plant regurgitated orange goo. SpongeBob managed to dodge it that time and cheered, but was then covered in it again after the second time it threw up. During the aftermath, SpongeBob revealed that Globulous Maximus was arriving at their planet.

They acquired the final piece in Pupupnunu, where it was surrounded by a Morphoid goo bubble that SpongeBob poked, causing it to explode. Once they acquired all four pieces, Globulous Maximus took over SpongeBob's body for the last time, telling SpongeBob that he wants to be like him, remarking about SpongeBob's happiness. He then referred to SpongeBob as being as wholesome as homemade bread, making Plankton doubt in his intelligence. The heroes and villains departed to the Vessel of Portentia to go to outer space and finally face Globulous Maximus.

After defeating him, the villains decided to capture Globulous for their evil purposes and betrayed the heroes by kicking them out of the spaceship.

Globulous Maximus revealed to the heroes that he didn't want to be evil, he was just ashamed by his appearance and took his frustration out by devoting himself to destroying planets. SpongeBob, on the other hand, told him to accept himself and boosted his spirits by feeding him Krabby Patties. In a desperate attempt to stop the villains, Globulous turned his appearance into SpongeBob's and used that form to fight them. If the villains win the ensuing battle, Globulous will be captured, and the villains and Dib will play card games. If Globulous and the heroes win, Globulous flies the heroes back to Earth and vows to redeem himself as "Sponge-Glob", before he flies away. 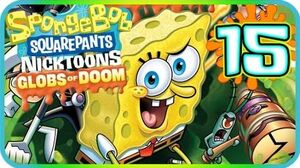