Feed on the Luminary's despair (failed).

Trap humanity in their most miserable moments (After going malicious, failed)

Gloomnivore is a minor antagonist in Dragon Quest XI.

He is voiced by Kosuke Goto in the Japanese version, and by Wayne Forester in the English version.

After the castle of Dundrasil is destroyed by Mordegon and King Irwin was murdered by King Carnelian, who unbeknownst to him was being possessed by Mordegon.

Gloomnivore went to the ruins of Dundrasil and fed on the king's despair of being unable to save his wife and son (The Luminary), unaware that the latter was still alive. Irwin was prevented from going to the afterlife and had to repeat witnessing his kingdom's destruction again and again.

After the fall of Yggdrasil, the people that rested in Warriors Rest Inn experienced a strange dream of a mourning knight. When the Luminary and his party went to the Inn, they all had the same dream as well, Rab recognized the knight as King Irwin. They than went to the ruins of Dundrsail and find Irwin's soul. To their surprise, Irwin, now as mourning knight attacked them. After defeating him, the Luminary will find out Gloomnivore is the one behind this. Gloomnivore, although admitting he loves the taste of Irwin's despair, wanted to have a new meal, so he tried to taste the Luminary's despair. However, the Luminary's power re-awoke at that particular moment, which give the taste of hope to him, much to his great disgust. Now angered, the Gloomnivore tried to kill the Luminary and his party. But he was defeated instead. With Gloomnivore's death, King Irwin's soul is finally freed and is able to go to the afterlife.

In the World of Lost Time, Calasmos's returns has strengthened the power of Gloomnivore, but at the price of greatly increasing his hunger. Now the Luminary visit the ruins of Dundrsail again and now Irwin's despair is unable to satisfy the beast, so Gloomnivore attacked the party, but ended up getting slain.

Gloomnivore is a purple lion-like beast that can feeds on people's emotions. He has six legs, demonic magenta wings with gold wing sides, and a dark purple pattern on his back. When strengthened by Calasmos, his eyes glow green.

Gloomnivore is a sadistic monster who enjoys feeding on people's despair. However, he finds the taste of hope to be disgusting. 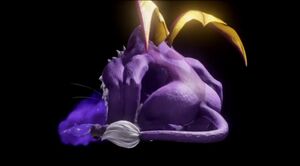 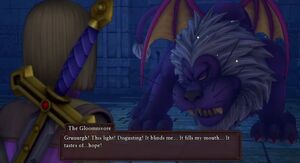 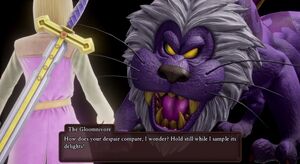 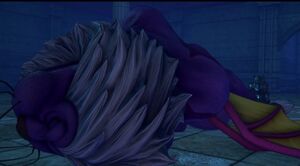 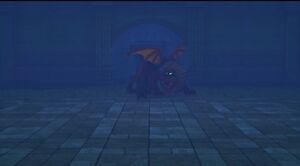