Destroy Mario and his party to avenge Hooktail's death.

Gloomtail is a gigantic black dragon, and one of the bosses in Paper Mario: The Thousand-Year Door. He is the older brother of Hooktail, and younger brother of Bonetail.

He was once The Shadow Queen's pet, and is kept in the Palace of Shadow. When Mario entered, Gloomtail was enraged to discover that Mario killed his sister Hooktail, so he attacked him. In the end, he was defeated, and before he "expired" he coughed up a treasure chest containing a star-shaped stone.

Gloomtail is one of the tougher bosses, with 80 HP, 8 ATK and 2 DEF. He can power up and use Megabreath (which is yellow). His regular breath is green and can poison Mario. He can also stomp and create an earthquake. 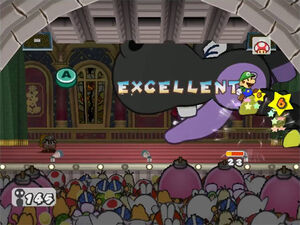 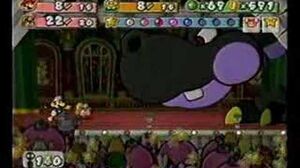