Gloomy the Clown is the main antagonist in the episode "The Toon That Ate Hollywood" of the Disney cartoon show Bonkers.

He was voiced by the late Kenneth Mars, who also portrayed Franz Liebkind in the original film version of The Producers.

Gloomy is an unfunny clown that did lame, uninspired tricks that made no one laugh. When Bonkers was chasing a burglar, the burglar threw him in front of Gloomy's show. Bonkers' accidental antics actually made his audience laugh.

Gloomy was furious. Later that night, he was watching the news with his toon sidekick, Giggles the Frog. They watched a news feature featuring Professor Ludwig Von Drake and his new invention, the Humorizer. It was meant to suck out the humor of a toon so it can be refreshed and made good as new. Gloomy saw this as a chance to steal every toons' humor.

He and Giggles went to Von Drake's house to steal the humorizer. They went to his safe only to find his lunch. They found the humorizer in his refrigerator, triggering an alarm to wake up Von Drake, only for him to get hit with an apricot pie, which was not funny. In the wrong hands, the humorizer can be a dehumorizer. For a toon without humor is the saddest thing a person has ever heard. That fact remained true the next day when Gloomy targeted Bucky Buzzsaw and Ranger Roger in the TV studio, causing them both to cry nonstop. He zapped a toon fast food stop, and every toon there started crying. He even zapped Goofy.

When Bonkers and Miranda encountered Gloomy, Miranda told Bonkers that he should sit out or Gloomy will zap him. She tried to arrest Gloomy, only to get hit with a peach pie. Bonkers noticed this and stated that it wasn't funny. Then suggested that chocolate cream pie was funny, getting himself caught by Gloomy, who zapped him with the humorizer. Bonkers became a crying mess. Gloomy tried to zap Miranda, but the humorizer doesn't work on humans. He and Giggles tried to escape, but noticed a crying Bonkers hanging onto Miranda. With this opportunity, Gloomy captured them with a net and then dropped them in a huge fish tank. He hoped that the tank would fill up with Bonkers' tears, drowning him and Miranda.

Gloomy and Giggles went to the Rubber Room Toon Club and zapped everyone inside. The Bully Boys became sad blues singers, and everyone else inside was crying. Meanwhile, Bonkers and Miranda escape from the fish tank when Miranda stuffed Bonkers' nose with pepper, putting him in a big sneezing fit and blowing the lid open. They encounter Gloomy at the Rubber Room. He threatened not for them to come any closer or he will destroy the humorizer, making sure the toons never smile again. Professor Von Drake arrived to get the humorizer back. He warns Gloomy not to use it anymore, for the consequences could be serious. Ignoring the warning,Gloomy zaps Von Drake, and the humorizer overloads with too much humor.

The gun shoots out of control and goes right into Giggles' mouth, shooting all the toons' humor inside him. All that humor has transformed him into a funny, giant monster named Gagzilla. Immediately, Gagzilla kicked Gloomy to the curb. Gagzilla began destroying Hollywood as his comedy act.

Police and the National Guard have tried to take him down. Gloomy wanted to be the funniest. So he performed clown tricks for the police only to get arrested. 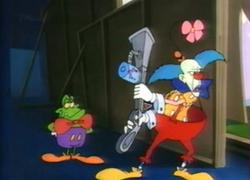 Gloomy the Clown and his sidekick, Giggles the Frog.
Add a photo to this gallery
Retrieved from "https://villains.fandom.com/wiki/Gloomy_the_Clown?oldid=3848158"
Community content is available under CC-BY-SA unless otherwise noted.