Gloria Ironbachs is a lawyer who teaches sensitivity in the workplace classes for chauvinistic males in Family Guy episode "I Am Peter, Hear Me Roar".

She is voiced by Candice Bergen.

She is called to the Happy-Go-Lucky Toy Factory after Peter Griffin tells a crude joke to a female co-worker named Sarah Bennett. Sarah, shocked and disgusted at what she heard, sues Peter and the company for sexual harassment, represented by her lawyer, Gloria Ironbachs. In exchange for dropping the lawsuit, Gloria makes Peter attend a workplace sensitivity seminar, which she also teaches. She also leads retreats for women and one time had her breasts squeezed by Peter while honking. She got into a catfight with Lois when she criticized Lois' family. Gloria proves to be more than a match for Lois, using her brute strength and ferocity to push Lois to her limits and nearly defeats her when she manages to trap Lois in a crushing bearhug. Gloria squeezes Lois so hard that the straps on Lois' dress snap, nearly forcing Lois to submit to Gloria. 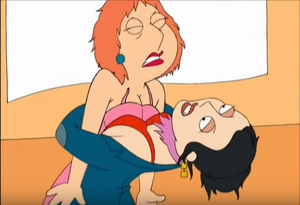