She was portrayed by Jessica Camacho, who later played Eva Salinas in Frequency.

Gloria Montero is the daughter of Luis Montero, the former police partner of Fin Tutuola. Years ago, Luis took a bullet for Fin (a bullet that would have killed Fin) and ended up on disability, and after losing his job as a cop, he took a security job to pay his for cancer treatments for his wife and Gloria's mother, Rita. Luis was reported on by Lt. Toni Howard, and he ended up losing his disability benefits. Gloria joined the U.S. Army and trained as a marksman, but she received a discharge due to her mental inability to serve due to dealing with the declining health of her mother, who eventually passed away. Gloria joined the police academy a month later, but she was let go when she failed a psychological exam.

After being kicked out of the academy, Gloria went on a murderous and vengeful rampage against the people she believed wronged her family, doing so by going after the people closest to them. She took a scoped .45-caliber Les Bear Prowler pistol stolen by Luis during another undercover operation and used it to fire a non-fatal shot at Fin's partner, Amanda Rollins; shooting Amanda's shoulder. Gloria later went after Toni Howard by shooting and killing her son, Mark, and also killed Ana Tejada, the girlfriend of drug lord Benito Escobar (who fired the shot Luis took for Fin).

After finding out Gloria's secret, Luis handed Fin the weapon and attempted to take the fall to protect his daughter, but SVU had figured out that Gloria was the true killer. Meanwhile, Gloria also killed a traffic cop who ticketed Luis' vehicle, and later placed the victim in her car and set it ablaze. Gloria's official villainous reveal came in the form of a video manifesto, which she recorded at the hospital where her mother died after killing the security guard. All the while, the psychotic villainess arrived at the home of Tom Hamill and entered the house, as she and her family used to live there. She targeted Tom's wife and son, threatening to kill them unless she talked to Fin. Fin entered the house donning a bulletproof vest, but removed it after talking to Gloria, expressing his guilt over what happened to Luis. Gloria berated Fin for not talking to Luis for years since he took the bullet, and even after Fin's attempts and pleas for her to drop her gun, she was still hellbent on killing her hostages. This led to Gloria being taken down by Fin and forcing the gun from her possession. Gloria was later placed in handcuffs by Fin, and later arrested for her crimes. 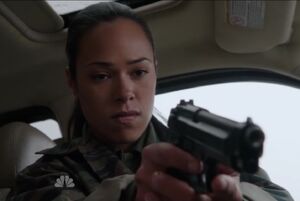 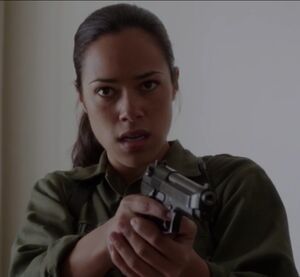