To rebuild the ship to get off of earth

Glowstrike is firefly-themed Decepticon and the leader of "Decepticon Island" in Transformers: Robots in Disguise.

Glowstrike was one of the many Decepticons imprisoned aboard the Alchemor. When the ship crash-landed on Earth by Megatronus, she was freed from his stasis pod. Eventually she met up with Scorponok and they made up a group of Decepticons in the crashed Alchemor's back section. They sent them collecting supplies to get them off earth, mostly Kickback and Saberhorn. Glowstrike was disappointed with Saberhorn's performence, but Kickback accomplished his task of bringing back required materials. She told him it will serve, but when Kickback asked for a reward, Glowstrike blasted at the latter to make him leave. She was left disappointed with Kickback's immaturity, but was shortly afterwards introduced to Steeljaw.

After Steeljaw released Alchemor escapees from Denny Clay's scrapyard, Glowstrike inspected and was impressed with (almost) all of them. Scorponok was captured, but Steeljaw's convinced Glowstrike that her Decepticon comrade had turned traitor. 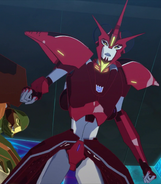 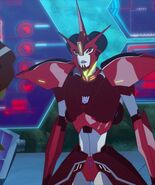 Retrieved from "https://villains.fandom.com/wiki/Glowstrike?oldid=3260267"
Community content is available under CC-BY-SA unless otherwise noted.