The Glus is a giant slug-like monster and a villain in Deltora Quest. Appearing as the main antagonist in The Maze of the Beast.

The Glus is a humongous slug-like creature with tons of eyes and fangs.

It is a giant white-skinned slug-like sea worm with blue glowing stripes, 8 eyes and 28 teeth, its name being an anagram of "slug", It is also known as "The Beast" or "Deathspinner", the former as it is the monster dwelling within the cavern known as the Maze of the Beast and thus guardian of the amethyst.

Though not in relation to the Shadow Lord or any of his creations, Glus is still a dangerous creature in its own right due to the strong glue-webbing it shoots from its mouth that hardens like cement within seconds. Though there are many ideas on the origins of Glus, the most well known is a Tenna birdsong tale of "Little Enna" that tells of the young girl who found a smooth stone that hatched a "sweet sea worm". But when ordered by her frighten mother to send the newborn creature back into the sea, Enna decided to run away and be with the worm as she is tripped by a wave of water and fell into a cavity which became the Maze of the Beast. Though years of being in the dark rendered it blind, Glus is attracted by any noise or movement within the maze it fashioned over the years with the remains of previous victims. Using the fine hairs on its underbelly to feel movement, but unable to move at fast speeds, Glus uses its glue-like substance to slow down its victim and devour him. In the anime, Glus was also shown to have rapid-healing abilities and its body is elastic, able to squeeze through tight crevices.

It is revealed that Ranesh encountered the Glus by a group of pirates that captured him and the crew of the ship that he was working on long before he met Josef. During this time, the pirates threw the ship's captain into the Maze of the Beast and Ranesh was lowered on a rope into the maze to see what kind of fate he suffered if he refused to cooperate with the pirates. Glus was shown capturing the captain in its tendrils but Ranesh was pulled out just before Glus came upon the doomed captain. The only victim in the series is Milne, a pirate that was betrayed by his fellow pirates. Lief, Barda and Jasmine also were forced to encounter this monster when they were thrown into the Maze of the Beast by the pirates and to find the amethyst. Fortunately they were able to figure out Glus' blindness and evaded it by walking slowly through the maze. Furthermore, Lief realizes the monster seeing the presevation of its lair is more important than food, carving out a fissure in the side of a wall that lead outside that forced Glus to ignore Barda and Jasmine as it quickly closes the hole instead of chasing after its prey. In the anime, after being tricked into causing an cave-in by Lief so he can get the amethyst, Glus focused its attention on stopping the cave-in as Lief and company escape through the fissure, with the monster apparently crushed under the falling debris. 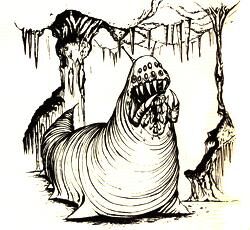 The Glus, also known as the "Deathspinner" and "The Beast". 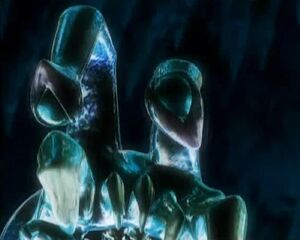 The Glus as seen in the Deltora Quest anime series.