Kill and eat Ariel and Flounder for food (failed).

Over-hunt Predator
Glut (also known as Glut the Shark) is a minor antagonist in Disney's 28th full-length animated feature film The Little Mermaid, and the TV series of the same name. He is a vicious great white shark who attempts to kill Ariel and Flounder for food.

Glut is only seen in a graveyard of ships at the introduction of Ariel seen. She and Flounder are exploring a sunken ship collecting human stuff in it. But it is not very long before Glut discovers them. Flounder is left to watch for sharks, but he swims to Ariel since he is afraid of sharks, to which she tells him not to be a guppy. Offended, Flounder says that he is not a guppy. He is still reluctant to watch out for sharks while Ariel looks for human stuff. Little do they suspect or know that they are about to encounter a real shark.

Flounder soon discovers Glut, but Ariel does not at first. Not believing Flounder, Ariel tells him to relax, but she then discovers that Flounder was right after all. Glut pursues Flounder, and a chase follows. Just as he attacks Flounder again, he calls him a big bully and blows a raspberry at him. Glut then tries to eat Flounder again, but he swims off just in time and Glut gets caught in an anchor. He is never seen after that.

It is unknown what happened to Glut, but might have presumably drowned because sharks constantly need to move in order to live. Although, because sharks are pretty strong, they could easily get out of an anchor; so maybe Glut could've survived.

In Kingdom Hearts, Glut appears as a boss, taking the same role as he did in the movie, attacking the group near the sunken ship. He attacks multiple times. The player can first leave the fight, but Glut later has to be beaten to get to Ursula's lair. 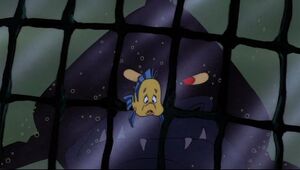 Glut as he appears in Kingdom Hearts. 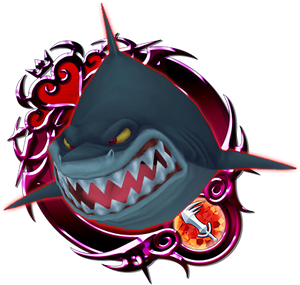 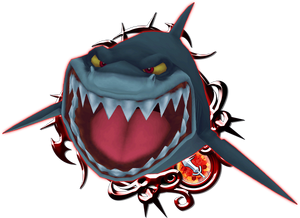 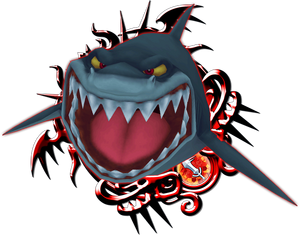 The Shark 7★ Power medal in Kingdom Hearts Union χ[Cross].
Add a photo to this gallery