The Gluttonous Goo (known as the Jelly Glee Tea in Japan) is a minor antagonist and a boss in the video game Kingdom Hearts Birth by Sleep. It is a giant gelatinous Unversed.

The Gluttonous Goo was created by the negative emotions of Vanitas, and is a manifestation of dark emotion and thought. It resides in Deep Space, and is the subject of the Deep Space Unversed Mission.

The Gluttonous Goo resides in the Launch Deck of the United Galactic Federation ship, and can be summoned when a Keyblade wielder investigates its dark energy. 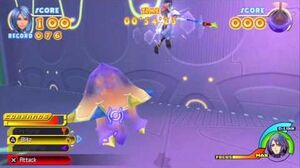