The Gnome Ruler is the main antagonist in the Adventure Time episode, "Power Animal." He is the cruel Grandmaster of the Gnomes, and the oppressive leader of the Beneathaverse.

He is voiced by Paul Reubens.

He first appeared at Finn and Jake's party on the top of their tree house in disguise as a spy. Standing on the shoulders of his Gnome Minions, he disguises himself as a tall, plump man wearing a large blue coat. He learns that Finn's powers are "endless" and later kidnaps Finn when he was sleeping. He then brings Finn to an underground lair filled with giant machines and his gnome minions.

After he reveals to Finn that he is actually the Grand Master of the Gnomes and the ruler of the Beneathaverse, the underground world that the gnomes live in, he says that he had been looking for someone with endless power for his machine, the Upturnoverdrive, which will turn the world upside down so that gnomes would rule the world. The gnomes use Finn to power the Cyclonic Roticerod, the Plasma Ball, and the Brain Machine (components of the Upturnoverdrive). They shock him whenever he becomes tired.

They are powering their last machine when suddenly Jake jumps down and begins smashing all the machines and freeing Finn. The gnome leader attempts to blast Jake with a laser while he had the power bestowed upon him by the Party God. Jake punches the laser and destroys it, defeating the gnome ruler. 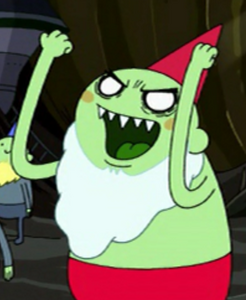 HA HA HA!!!
Add a photo to this gallery

Retrieved from "https://villains.fandom.com/wiki/Gnome_Ruler?oldid=4273128"
Community content is available under CC-BY-SA unless otherwise noted.