Leader of the Gnomes

Sending his gnome army to defeat the players' robots

Gnomus the Gnome King is one of the supporting antagonist/enemy in the 2015 third-person shooter game Plants vs. Zombies: Garden Warfare 2. He is the leader of the gnomes who attempted to destroy the Infinite Robots from both Plants and Zombies sides.

Gnomus first appeared when the players sent their Infinite Robots in the Gnomiverse. He first sent his Gnome Floatie to drain the Time Stability. After it was destroyed, he sent his gnome army to stop them, which includes Shooty Gnomes, Shieldy Gnomes, and Explody Gnome. After completing those waves, he sent his Impostor Kings (Blue Gnome Kings, Green Gnome Kings, Yellow Gnome Kings, Red Gnome Kings, and his clones). During Nemesis Waves, he ordered his gnomes to summon a Garden/Tombstone, which can spawn an infinite amount of Plants/Zombies. After Wave 25, he sent more Impostor Kings and Gnome Floaties.

When the player is defeated, he gave the Players a chest. when they collect a number of time shards below 500, he said: "Too few Time Shards to merit a reward! Begone!".

In the Trials of Gnomus DLC, he returned and requested the plants and zombies to do the trials made by the Ministry of Mystery.

Gnomus also appeared in Brothers Gnomus' boss hunt to command his gnome army and the titular group of bosses to invade Time Park.

King Gnomus did not make his appearance in Plants vs. Zombies: Battle for Neightborville. However, Sven mentioned him and the Gnome Gnights during his birthday party through phone calls.. 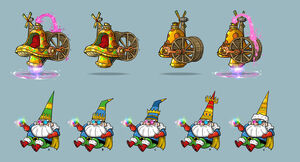 Concept art of Gnomus.
Add a photo to this gallery

Retrieved from "https://villains.fandom.com/wiki/Gnomus_the_Gnome_King?oldid=4142664"
Community content is available under CC-BY-SA unless otherwise noted.