Various depending on types of Gnorcs

The Gnorcs are a race of creatures that are the former minions of Gnasty Gnorc as well as his own kind and one of many races in the Spyro video game series. This particular species of enemies are big and weird trolls though their name implies that they are part-gnome and part-orc.

The term "Gnorc" is technically short for "Gnorcii Tuconsis". Their origin is unknown, but they are generally believed to have spawned from swampy regions.

Long ago, when dragons first started to encounter Gnorcs in the Dragon Realms, there was a difference of opinion on what to call them. Artisans tended to think the Gnorcs would bring them good luck due to their squat appearance and apparent harmlessness, and so-called them "Gnomes". On the other hand, Peace Keepers were immediately suspicious of the slimy race, and referred to them as "Orcs".

Tuco the balloonist called a meeting among the dragons to decide the matter, and they settled on calling the creatures "Gnorcs" and created the scientific name "Gnorcii Tuconsis" in honor of Balloonist Tuco.

In Spyro the Dragon, Gnasty Gnorc created Gnorcs out of gems and used them as his military soldiers. They litter the landscape, attempting to kill Spyro and protect the imprisoned Dragons. There are many variations of Gnorcs, many of which are, by themselves, harmless. However, Gnasty had supplied them with weapons, armor, and gadgets to make them formidable. In the final level, right before his boss battle, a desperate Gnasty furnished his remaining Gnorcs with guns.

In Spyro 2: Ripto's Rage!, the Gnorcs made a cameo as friendly characters in Dragon Shores, where they are the attendants of each of the rides/games, apparently now reformed after the defeat of Gnasty. One is named Gniles.

Gnorcs appeared again in A Hero's Tail as enemies when Gnasty Gnorc returned and are featured in almost every homeworld and level (even after their master's defeat). It is revealed in Red's Laboratory that Red has converted most of the Gnorcs into improved robot forms with the help of the captured Professor. They have not reappeared since.

The Gnorcs appear in the remake of the Spyro trilogy with a new design. 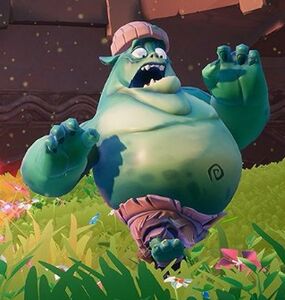 Retrieved from "https://villains.fandom.com/wiki/Gnorcs?oldid=3995139"
Community content is available under CC-BY-SA unless otherwise noted.