Capture Mr. Jenkins and bring him to Snerz (failed).

The Goat is the secondary antagonist of the first season of the 2019 Netflix series Green Eggs and Ham. He is a bounty hunter hired by Hervnick Z. Snerz to capture the Chickeraffe. He is Sam-I-Am and Guy's second arch-nemesis.

He is voiced by John Turturro, who also played Jesus Quintana in both The Big Lebowski and The Jesus Rolls and Monkeybone in the 2001 film of the same name.

After numerous failures to capture the Chickeraffe (named Mr. Jenkins by Sam-I-Am), Hervnick Z. Snerz sends his aid Yes Man to find Goat and hire him. When Yes Man arrived at the bar, he was given cold stares from a bunch of tough guys. Goat then gets into a scuffle with the tough guys and comes out victorious before riding on his motorcycle to find Sam-I-Am and Guy-Am-I.

After following the Chickeraffe's trail, he eventually finds Sam and Guy staying with Michellee and her daughter E.B. at a cabin, forcing Guy to send Michellee and E.B. to go without him and Sam. Guy then gives Goat the briefcase with a tape recording inside it, passing it off as the Mr. Jenkins. After driving a few miles from the cabin, Goat finds out about the tape and that the motorcycle's engine was filled with Green Eggs and Ham. Goat, angered that he was tricked by Guy and the recording device exploded, he chases Sam and Guy through a snowy mountain until he eventually corners the duo. Before he could throw them off the mountain, Mr. Jenkins viciously wails, breaks free and fights Goat before throwing him on top of the mountain, causing an avalanche and Goat's credit card to fall into the hands of Sam and Guy.

Goat eventually finds Sam and Guy again at Meepville and tries again to grab Mr. Jenkins. As managed to succeed, but before he could clear the pier, he is then hypnotized by BADGUY agent Gluntz, cuffed and taken to BADMEN where he is interrogated by Gluntz.

Eventually, Goat broke out and tracked Mr. Jenkins to the balloon port. As soon as Mr. Jenkins was on the balloon, Goat hijacked it. Guy uses his flying invention to get to the balloon and save Mr. Jenkins before putting said invention on the goat. Goat tries to kill Guy, but the invention explodes, causing himself to fall onto Snerz to their presumed deaths. While Snerz survived, it is implied that Goat also survived and is put in jail along with Snerz. 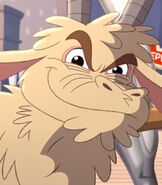