Bloodlust
Insanity
Can remain elusive and hidden until too late

Stalking people in the forests.

Kill anyone who enters his woods.

Keep the Maryland forests for himself.
Kill goats.

The Goatman is a cryptid who is said to be half-man, half-goat. Although his origins are unknown, the most popular origin story is that he was once been a scientist who worked at Beltsville Agriculture Research Center, who experimented on goats. Unfortunately, during one of these experiments, he was mutated into a goat/human hybrid, and went insane. He began to attack cars with an axe near the back roads of Beltsville, MD.

Others believe he is a mere hermit, seen walking alone at night along Fletchertown Road.

The earlier known form of such a creature was the Satyrs and Fauns of ancient Greece in mythological culture. However people are almost certain such beings were just the product of an overactive imagination, the modern day Goatman seems to have physical evidence.

The Waterford Sheepman was a mysterious beast seen in the 1970s, and it was a gigantic creature about seven foot tall with horns. It lurked in farm fields, stalking unwary animals and occasionally humans. The Sheepman resembled a giant humanoid sheep, yet was said to be linked with the Goatman. It terrorized Waterford town in Pennsylvania and thus was possibly an early incarnation of the Goatman. One witness said she saw the Sheepman running across an open field late at night when she got back home.

The Pope Lick Monster was seen during 2012 and was seen by numerous people of the town it inhabits under an abandoned bridge and in an abandoned trestle. The Pope Lick Monster has very similar origins to the Goatman and was even said to be a goat farmer who sold his soul to Satan in exchange for immortality or dark magic. This adds to the Goatman's supposed supernatural abilities such as voice mimicry.

Various people in 2015 said they have photographic evidence of the Goatman which has sparked a new hunt for the creature. This is the most recent sightings of such a creature to date.

A cartoon image of the Goatman. 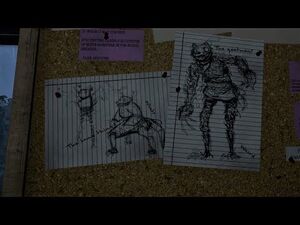 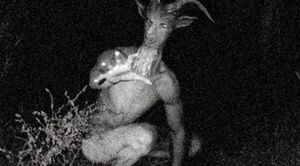 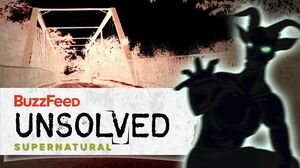 The Demonic Goatman's Bridge
Add a photo to this gallery

Retrieved from "https://villains.fandom.com/wiki/Goatman?oldid=3483720"
Community content is available under CC-BY-SA unless otherwise noted.