Command over an army of goblins

Get revenge on Krudsky for using him (succeeded).

He was voiced by Tim Curry, who also played Ben Ravencroft.

The Goblin King was bribed by the greedy, corrupt, diabolical, and manipulative magician named Krudsky to help him seize magical powers and take over the world, by using Princess Willow as bait. When Shaggy Rogers and Scooby-Doo entered the spirit world to take his staff, the Goblin King captured them and locked them in his tower dungeon while he unleashed his goblin hordes on Halloween Night. The Goblin King made a deal with Krudsky and gave him his powerful scepter, but Krudsky betrayed him and turned him into a goose. Fortunately, Shaggy and Scooby-Doo nabbed the scepter and used it to bring everything back to normal. The Goblin King reprimands Princess Willow for her impetuous, reckless, and selfish behavior and grounds her for a year before he admitted that he is so glad to have her back. He then congratulated the Mystery, Inc. gang for saving everything. The Goblin King erased everyone's memories (except Shaggy and Scooby's) to maintain peace in both worlds and took Krudsky back with him as a prisoner for his disloyal treachery.

While the Goblin King appears to be a knavish, cruel, arrogant, terrifying, manipulative, and dangerous monster as many monsters are shown to be quite scared of him, even if they hear his name said out loud, he is actually quite the opposite. The Goblin King is kind, caring, rapturous, sympathetic, compassionate, and enthusiastic, so he truly loves his daughter, as he was willing to give up his magic scepter in order to get her back safely. However, he is shown to be firm and strict as he held his daughter responsible for all of the trouble that had occurred on Halloween and grounded her for a year.

He also doesn't tolerate those who he sees to be an enemy as he send Shaggy Rogers and Scooby-Doo to the tower dungeon when they attempted to steal the scepter or when he decided to punish Krudsky for all the troubles he caused. However, he later changes his opinion of Scooby and Shaggy when he witnessed their bravery in stopping Krudsky, and thus allowed them to keep their memories of everything that had happened. The Goblin King is shown to be observant, sharp-eyed, circumspect, attentive, cautious, aware, and careful when regarding his magic as he tried to warn Krudsky that he wouldn't be able to handle the power of the specter. The Goblin King is also shown to be care for his friends as he brought Jack O'Lantern back to life by relighting his flame. 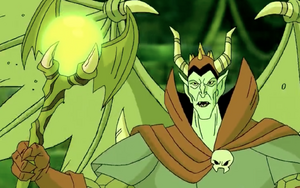 "The goblin hour has arrived!" 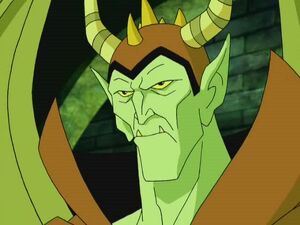 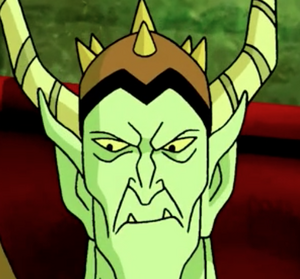 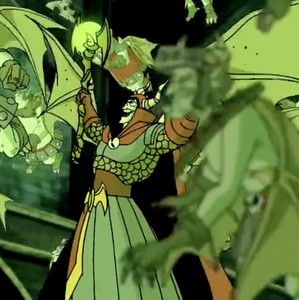 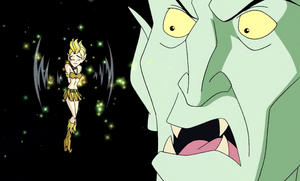 The Goblin King reprimanding and grounding Princess Willow for her disobedience. 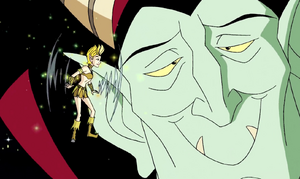 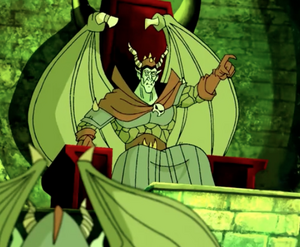 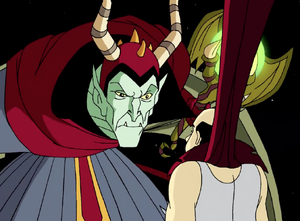 The Goblin King confronting Krudsky before imprisoning him for his treachery.
Add a photo to this gallery

Retrieved from "https://villains.fandom.com/wiki/Goblin_King_(Scooby-Doo)?oldid=3477347"
Community content is available under CC-BY-SA unless otherwise noted.