The Spiderwick Chronicles: The Seeing Stone

The Goblins are toad-like monsters that serve as supporting antagonists in The Spiderwick Chronicles.

There are many signs to look for if anyone suspect goblin folk are in the vicinity. Cats, dogs, and other small domesticated animals go missing is a telltale sign, as goblins will capture and eat them. Nightmares, especially of being chased, are another indication. For unknown reasons, goblins have this effect on humans.

Goblins are malicious, aggressive, bloodthirsty, and grotesque. They range in skin tone, color, and size. But Red Caps are notably larger than common Goblins. These Goblins haunt battlefields. They are so intelligent enough to make crude weapons and lead battalions of Goblins, deploying and ordering them around.

The single goblin is a nuisance, but in large numbers they can be quite hostile, dangerous, sanguinary, and prejudicial. Generally, Goblins travel in roving bands that scavenge for food and hunt smaller prey. They occupy positions on Earth, constructing their homes and lairs in rocky outcroppings, caves, or even in ditches along the sides of roads. Although their presence may go unnoticed, as humans are incapable of perceiving them unless they use a special lens that allows one to see them. Their pranks run from distasteful to depraved. The rare goblin that is mischievous but good-natured is known as a hobgoblin. Most goblin species are born without teeth. They must find substitutes, either the teeth of other animals, or sharp objects like glass, rocks or metals other than iron.

Their toad-like body is covered with fleshy polyps and their eyes can move independently of on another. The smaller simple eyes detect body heat. Some have bioluminescent organs on the tips of their tongues. These are used to attract sprites, their favorite food. Goblins have acute hearing and a highly refined sense of smell. Goblins love human inventions, they will use anything discarded by humans. Goblins urinate to mark their property and territory.

Tomato juice is described as being able to burn them like acid. Vinegar can also blind them and their dimwitted nature makes them relatively easy to outsmart. Tomato juice, vinegar, oatmeal, and salt are all known to burn the flesh of the goblins. 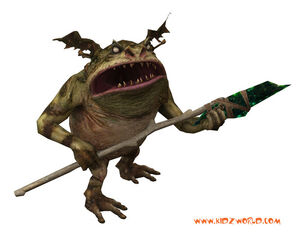 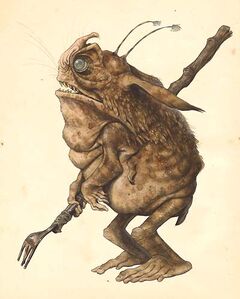 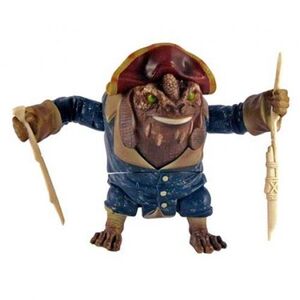