Villains Wiki
Register
Don't have an account?
Sign In
Advertisement
in: Doctors and Scientists, Greedy, Criminals,
and 16 more

Turn the world into her experimental lab

Goche Ru Medou is a major antagonist of Kaitou Sentai Lupinranger VS Keisatsu Sentai Patranger. She was a greedy Status Gold Ganglar doctor and the third-in-command of the Interdimensional Crime Group Gangler, serving as the series' monster enlarger.

She was voiced by Ayana Taketatsu.

Goche Ru Medou is the tactless and corrupt Ganglar scientist who supports the Interdimensional Crime Group Gangler as a doctor to suit her personal agenda. She serves Dogranio Yaboon as his left-hand servant.

The built-in golden safe on her back contains one of four Lupin Collection items that she uses for any situation, the first being the "Gros caliber" (Get Big) syringe which allows her to enlarge or enhance her fellow Gangler members.

The second item is the "Guéris le monde" (Heal the World) binoculars which enables her to completely analyze whoever she observes, which initially Noël feared would expose his true identity as a Gangler, so as a result of that, he immediately forced the Lupinrangers to retreat upon seeing Goche about to use it on them.

The third item is the "Coupe le gâteau" (Cut the cake) scalpel which allows Goche to turn her right hand into a sharp blade.

The fourth item is the "Évade-toi de l'autre côté" (Escape to the other side) crest that allowed her to liquefy her body for teleportation. She later gave it to Zamigo Delma after remodifying him without permits from Dogranio.

When she later confronted the Lupinrangers and the Patrangers with the last of her Experimental Body creations, Goche found herself betrayed by her boss Dogranio, who stole her Lupin Collection items and left her to be killed by the Sentai teams. Before her death, Goche used the last of her strength to transplant her golden safe from her body into her creation, declaring it was her final experiment before she perished. 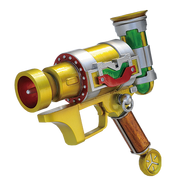 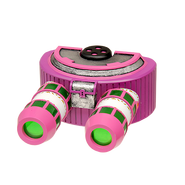 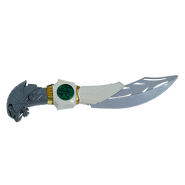