Heavenly Father
The Almighty
Almighty Ruler of the Universe

Protect the Earth and his creations from threats of evil

God is the Almighty Ruler of the Universe and a character in The Simpsons TV series. While not antagonistic in the series, he acted as the final boss in The Simpsons Game.

God serves as the final boss to The Simpsons. He uses previous enemies encountered as icons in a "Guitar Hero"/"Dance Dance Revolution" match, while the chosen song ("Rock you Like a Hurricane", by the Scorpions) plays. As the whole family, you have to make them hit the notes in a correct time to break the game stations and defeat the minions he sends. They will change when the station is broken. Each station is a parody of a popular video game console (i.e.: Praystation is a parody of PlayStation, Xodus Box is a parody of Xbox and the Hii or I am in the Wii version is a parody of the Wii).

When Homer was made the new Grim Reaper, he was forced to kill his wife, Marge. As he offered her body to God, he asked him to remove his powers. After turning Homer back to his former self, he then realized Homer tricked him, and the body he offered was Marge's sister, Patty Bouvier. Homer escapes on a motorcycle, being chased by God's beam of light. Homer passed a railroad, right before the train went by. But God's light beam couldn't cross the moving train, so he gave up.

After Homer tries to burn Bible, the Simpsons' roof is torn off, the real God chokes Homer to death and blames Ned Flanders for doing it. Marge comes in and asks if God can fix everything, but God says that the "Big Man Downstairs" wouldn't like it. the Devil appears with Maude, and it is shown that God is under the Devil's power when the Devil demands for a coffee. 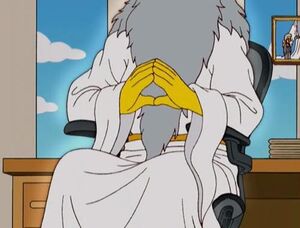 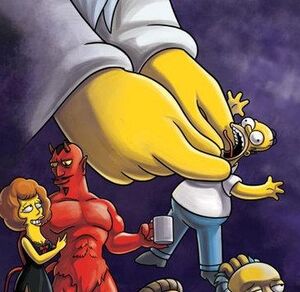 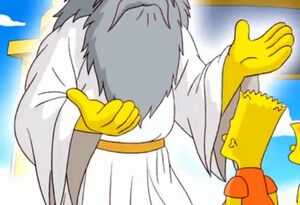 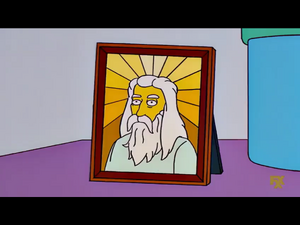 A picture of God's true face.