God Serena is a major antagonist from the manga/anime series Fairy Tail. He is a Second Generation Dragon Slayer that serves as one of the top members of the Spriggan 12.

Prior to this, he was a member of the Ten Wizard Saints where he was not only hailed as the strongest of the saints, but the strongest mage in Ishgar. Upon being offered by Zeref to take down Acnologia, God Serena abandoned his homeland and joined the Alvarez Empire.

He is voiced by Kazuyuki Okitsu in the Japanese version of the anime, and David Matranga in the English dubbed version.

God Serena has the appearance of a tall man with long orange hair, tied up into two large ponytails. He also has a large scar that appears across the middle of his face. He wears a sophisticated wizard outfit comprised of blue, red and white coloring as well as large black boots.

One of his notable features the large object on his back, which appears to be a pinwheel-like object with a divine appearance, reflecting his god complex personality.

In contrast to his introduction, God Serena comes off being quite the dramatic character and he doesn't hide it. He often enjoys putting himself on the spotlight and shows off his ego, whether it's on the battlefield or during a simple meeting. Along with this, he is extremely arrogant, looking down upon those he defeats with relative ease and believes that he is powerful enough to take on the likes of even Acnologia himself.

Despite his ego, he can be serious and at times even vicious as he is willing to go as far as unleashing a multitude wave attacks on his eneimes without giving them the opportunity to fight back.

During his time on Ishgar, God Serena was the top member of the Ten Wizard Saints where he was hailed as the strongest mage of his continent. At some point, he was implanted with eight different Dragon Slaying Lacrima into his body, granting him control of eight elemental Dragon Slaying Magic. Following destruction of the Magic Council and the separation of Fairy Tail after its conflict with Tartaros, God Serena learned of Zeref and his Alvarez Empire in which he decided to defect from his homeland and join the empire, for the sake of defeating Acnologia.

God Serena was present at a meeting with Zeref and most of the Spriggan 12, prior to the attack on Fairy Tail. During this time, he shows himself off a bit, much to Brandish's disgust, though he dismissed her. When Zeref asked if he would be troubled that he would be fighting against his former people, God Serena assured him it was no issue.

God Serena eventually arrived to Magnolia, accompanied by August and Jacob Lessio. The three confront of the Four Wizard Saints, in which Hyberion demands why God Serena would go as far as to betraying his own homeland, but God Serena dismisses his question. He then takes them all on in what appeared to be a quick and easy battle, as he appeared unharmed, while the Wizard Saints remained heavily injured. He then noted Warrod, who wished to see Mavis' smile before he dies.

God Serena prepares to kill him, but Warrod manages to catch him off guard then the other Wizard Saints attempt to defeat him once more. Despite their best efforts, God Serena was able to defeat them and prepared to kill them all, until August prevented him from doing so, after learning of where his magic originated from.

Losing track of where they were, the three decided to continue heading for Fairy Tail until they are interrupted by Acnologia. God Serena, filled with anticipation, looked forward to battling with Acnologia, only for him to be immediately killed by the Dragon King without even noticing.

Later on in the war, Neinhart created a historia of God Serena, alongside Bloodman and Wall Eehto. This weaker version of God Serena acted as Neinhart's shield and charged forward in which he faced against Fairy Tail's main forces and attacked them with a large wave of his magic. He was eventually stopped by Gildarts who then exchanges blows with him head on. Gildarts manages to defeat God Serena with his Crush Magic. Afterwards, he notes how powerful his opponent was and had he been alive, he most likely would not have been able to take him head on.

God Serena is a Second Generation Dragon Slayer that wields eight Dragon Slaying Magic, each with their own unique elemental properties. Like all other Dragon Slayers, God Serena should be capable of consuming the elemental properties of said magic to restore and increase his power. Combined with his mastery and knowledge of his power, he is overall a capable and powerful being that can take large forces of enemies. 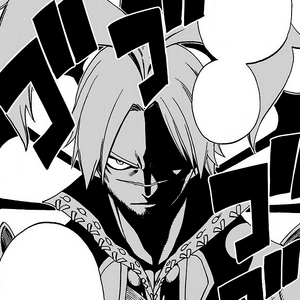 God Serena's appearance in the manga. 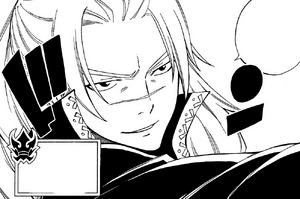 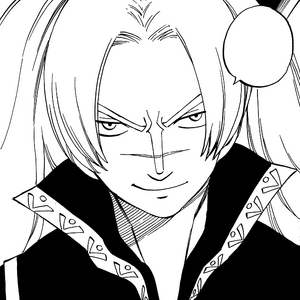 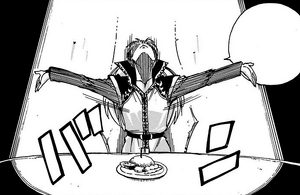 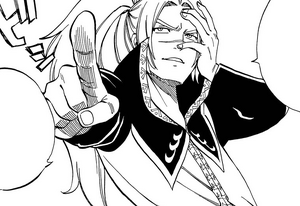 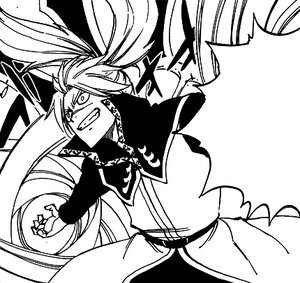 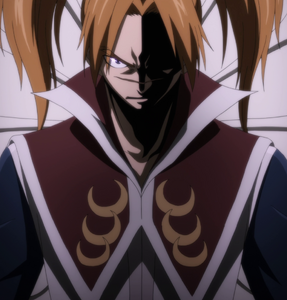 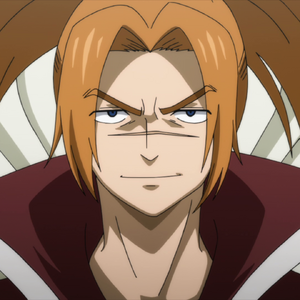 God Serena's appearance in the anime. 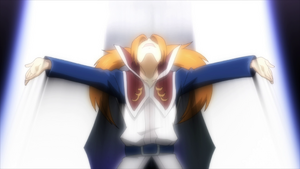 God Serena dramatically answer Zeref during a meeting with the other Spriggans. 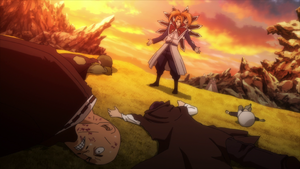