Villains Wiki
Register
Don't have an account?
Sign In
Advertisement
in: Deities, Evil from the Past, Vengeful,
and 26 more

Of unknown origin, Godcat created the world out of loneliness, originally making cats the dominant species of Earth. However, after this advanced animalistic civilization grew too friendly with humans, Godcat destroyed their society and their limbs before going elsewhere. However, it left behind three jewels, which humans have guarded in fear of bringing them together would result in Godcat's return.

At some other point, Godcat created Akron in an attempt for him to rule over Earth.

Making her first appearance in Bullet Heaven, Godcat serves as the game's final boss, where her first shows off its dual form surrounded by a dracdonic circle. Both Godcats share the same health bar, and both use their expectedly colored projectiles (White for Light Godcat, Black for Dark Godcat).

Following a group of cats stealing the gems to make their god return to them, the group of heroes set out on their quest to the Temple of Godcat to hopefully stop her return. Along the way throughout the game, both aspects of Godcat are fought after each gem's theft, with the light form controlling The Creator and the dark form controlling The Destroyer, two vehicles with the ability to use powerful magic. Finally reaching the temple, the heroes find the ritual complete and Godcat ready to strike the heroes down. Even despite her grand power and might, the quartet continued their assault with no hesitation, much to Godcat's confusion and amazement. Eventually finding humanity worthy, Godcat ended their duel out of respect, before gathering her followers to head off into the great void of space for a new planet to populate.

Although Godcat is no longer a villain, both forms of her appear in Epic Battle Fantasy 5 as NoLegs' limit breaks. She serves as a watcher of the planet and its people, and it is also implied here that The Devourer was her creator.

Godcat's two forms are similar in form to humanoid, mouthless cats with two large eyes and a long tail, with one form being white with a blue aura and the other being black with a red aura. 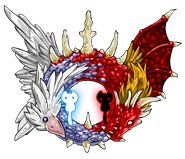 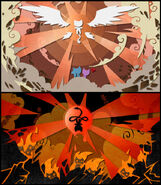 Gotcat creating cats and then punishing them.