NOTE: This article is about the incarnation of Godspeed from the Arrowverse. The mainstream version can be found here: Godspeed.

Use Tachyons and Velocity-9 to become a speedster.
Steal every viable chemical to create a serum to make his powers permanent (both succeeded).
Kill XS and Impulse (failed).
Gain infinite velocity and organic speed.
Win the Godspeed Civil War.
Defeat Team Flash and the rebel Godspeeds.
Regain his memories and his powers (all succeeded).
Kill The Flash and the Reverse-Flash (failed).

He is a former Mercury Labs intern from the year 2049 who then secretly operated as a villainous speedster who gained his powers from the recreated Velocity-9 drug. He is also the first enemy of Nora West-Allen/XS and the archenemy of Bart Allen/Impulse.

Little is known about August Heart's backstory or why he turned to a life of crime. What is known, however, is that he had a brother named Jorge who died under unknown circumstances.

Prior to the year 2049, he began experimenting on people with tachyons so he give himself speed. Eventually, August successfully became a speedster dubbed "Godspeed" and began stealing chemicals so that he can ensure his Velocity-9-enhanced powers will become permanent.

At some point, August visited the Flash Museum where he saw how Zoom used Velocity-9 in his crime spree. He also met Nora West-Allen. Nora would go on to attempt to stop Godspeed's robberies, but he knocked her down the first time with a lightning bolt, indirectly revealing her hidden speedster powers that her mother secretly dampened.

Later, he was confronted by Nora and was surprised by her newfound powers. He then easily defeated her the second time in speed combat, and after which, he murdered her friend Lia for taking what he aimed to steal before zooming off.

After learning about the speedster's weakness from Eobard Thawne, Nora fought and defeated Godspeed by tricking him into getting in the way of some radio waves that disrupted the V-9 in his system. Heart's actions were exposed and he was then taken into custody by the C.C.P.D.

Although a new timeline was created, August still existed and obtained his powers through artificial means at some point, needing to frequently be recharging his powers. However, in this timeline, he becomes a personal enemy towards Bart Allen (the Flash's son) to the point that Bart compares their relationship to that of the Flash and Reverse-Flash. August's hatred for Bart becomes so intense that at some point he captures Bart's mentor Jay Garrick and forces Bart to watch as he murders Jay.

Desiring more power for himself, August began creating an army of Godspeed drones through unknown means and sent them to attack the Flash in the summer of 2019, causing chaos throughout Central City on at least three occasions and being defeated each time by Time Flash. After every drone was defeated, they were unmasked as imposters and were incapable of speaking, instead making strange modem-like noises. The fourth Godspeed drone attack took place on October 8th, 2019, and the imposter was quickly apprehended by the Flash and sent to Iron Heights like the three others speedsters. At this point, the team had no evidence about the drones, their powers' origins or who was sending them to cause havoc, but they did suspect August Heart.

After the Crisis, a fifth Godspeed drone arrived in 2020 and attacked Team Flash, this time being fully capable of speaking. He demanded the Flash's speed or suffer the consequences, and even killed the incarcerated Godspeed clones for their speed as well. Upon taking hostages to enforce the Flash's cooperation, the drone was defeated thanks to the combined efforts of the Flash and Pied Piper. Afterwards, the Flash questioned the drone at Iron Heights and he claimed that "the one who sent him" wanted infinite velocity, who was August Heart himself. But he lost his ability to speak just like the previous drones; thus once again, any connection to Heart was not discovered nor confirmed.

In 2049, Bart and Nora fought August and managed to defeat him. However, he escaped and they chased him to the Flash Museum. Once there, they were too slow to stop him from using the Cosmic Treadmill to disappear and retreat to the past. Following his departure, his drone army split into two factions: one that seeks to find August to become his acolytes and give him more speed, and another that seeks to kill him to gain their freedom and live their own lives. The war escalated and was taken to the past, with the rebels seeking August to kill him while the acolytes siphoning the Speed Force for power and attacking Team Flash.

Eventually, August was found by Cecile Horton, John Diggle/Spartan and Frost. However, for unknown reasons, he was amnesiac and couldn't remember his own name. He was taken to STAR Labs, where Caitlin Snow administered a dark matter solution to him. This enabled August to remember at least his identity, but not enough to remember his own past or life. Eventually, with drone war worsening and the arrival of Bart and Nora from the future, Flash projected his consciousness into August's mind in hopes of helping him regain his memories. Once inside, he found himself at Zauriel Cathedral, except it had been redecorated into a Godspeed sanctum. There, August awaits him, clad in his Godspeed suit. 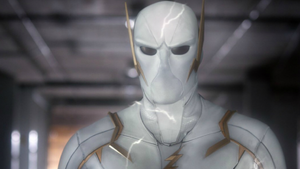 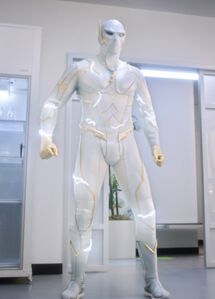 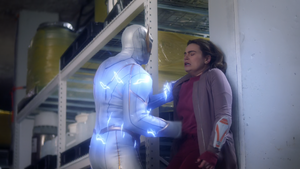