NOTE: This is about the identical progeny of Godzilla. For Godzilla himself, see Here .

Godzilla Filius (Japanese ゴジラ・フィリウス Gojira Firiusu), is a cell-divided relative of Godzilla Earth and the titular main antagonist in the 2017 horror-anime film Godzilla: Planet of the Monsters. He (or It) is the third Godzilla variation in the Toho reboot era, and a cell clone of Godzilla Earth in the film.

Godzilla Filius was spawned from one of Godzilla Earth's cells, along with Servum.

When the crew of the Aratrum find Tau Ceti e uninhabitable, they decide to return Earth and take it back from Godzilla and other monsters. They discover that 20,000 years have passed, and Godzilla has taken over the planet.

While making plans to destroy Godzilla once and for all, the crew was attacked by a swarm of Servum. While retreating, they encountered Godzilla Filius, believing it to be Godzilla himself. When Haruo takes a hover bike and attacks it to find the exact time when the energy shield is generated, Haruo was unable to deliver enough damage to warrant such a reaction. Colonel Leland fires at the spines with an artillery tank, which triggered the response. Godzilla Filius then blasted Leland and the craft with atomic breath, then turned away.

After gathering the information needed, Haruo enacted his plan to defeat it by disabling Filius' EMP, and the plan was successful in killing it. However, upon analyzing Filius, the Aratrum scientists determined that it was identical to Godzilla from 2030, something highly unlikely given Godzilla's capacity to evolve and the amount of time that had passed. Their fears came true when the fully grown Godzilla Earth (the true one) emerged from a mountain and attacked, destroying their entire attack force as they attempt to escape, although some managed to survive.

Filius is almost identical to his larger father, Godzilla Earth except with minor differences. he lacks the spiky protrusion, and has more defined tooth-like appendages. It also has a more sleek, muscle fiber-like skin. The previously mentioned characteristics seem to portray a more youthful look. The skin also differs in color, looking blueish-green, leaning more towards blue.

Like Godzilla Earth, Godzilla Filius can deploy an Asymmetrically Permeable Shield from an organ located in his dorsal plates. This shield can deflect any and all attacks and renders Godzilla Filius effectively invulnerable to damage.

Godzilla Filius can produce a powerful charged particle beam which he can fire from his mouth and strike targets.

The humans kill Filius by implanting EMP probes inside it from the dorsal spines. When it attempts to release atomic breath, the excess of electromagnetic energy caused it to explode, thus destroying it. 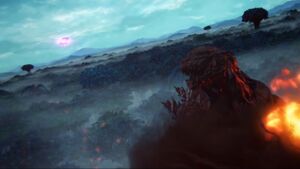 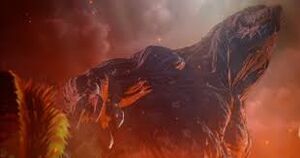 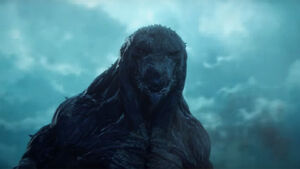 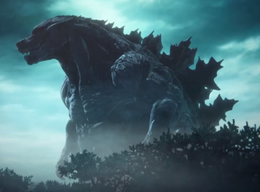 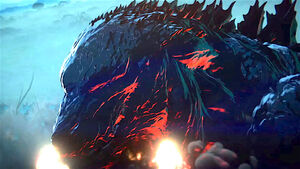 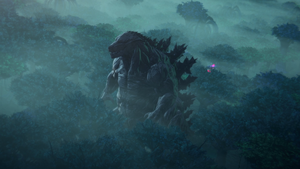 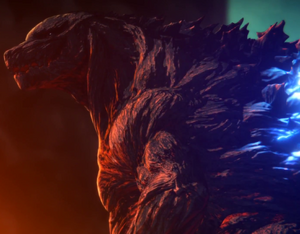 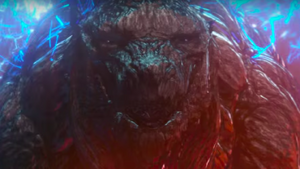 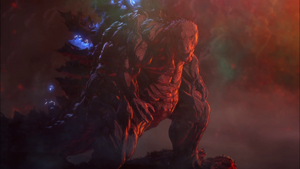 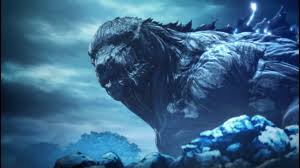 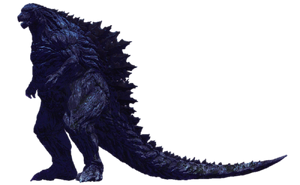