Missionary
Leader of the Hakkeshu

Goenitz is the main antagonist from the video game The King of Fighters '96.

He was voiced by Yoshinori Shima and is currently voiced by Susumu Akagi.

Goenitz was the leader of the Hakkeshu, knowing of his duty since he was a child. Because of this, he decided to become a priest. He soon started his plans to awaken Orochi, searching for the other Hakkeshu to help him. While looking for a suitable host for Orochi, he meets the crime lord Rugal Bernstein and fights him. He defeats Rugal and takes out his right-eye, granting him a portion of the Orochi power. He then commands Vice and Mature to watch over Rugal, becoming his secretaries and helping him host the King of Fighters tournament.

Goenitz then goes after Gaidel, who was a Hakkeshu as well, but is disgusted to learn that Gaidel was leaving a peaceful life and had no interest on helping him. As a form of vengeance, Goenitz makes Gaidel's daughter enter in Riot of Blood, going completely berserk and killing Gaidel and the entire village he lived in. Goenitz then brainwashes her and leaves the place to continue his plan. Knowing that the seal of Orochi wouldn't break easily, he decides to look for the heirs of the clans that imprisoned Orochi. He finds the Yata household and kill their heir, Maki Kagura. Her sister, Chizuru Kagura, learns of Goenitz plans and decides to host the King of Fighters tournament, in hopes of convincing Kyo Kusanagi and Iori Yagami on helping her defeat Goenitz.

Goenitz leaves Vice and Mature watching over Iori, while he goes after Kyo personally, wanting to test how mighty he was. He defeats Kyo easily, and decides to play Chizuru's game to see how far will she go. Chizuru meets with the winning team, and just them Goenitz decides to interfere, blowing everything away with his wind powers.

If Goenitz is defeated by other teams, in order to avoid being sealed away Goenitz uses winds and directs winds which he controls to kill himself by having wind blades shred his own body to ribbons. Because he is not sealed away, there will always be a possibility that he may reincarnate one day.

Kyo and Iori call a truce on their rivalry and team up with Chizuru to fight Goenitz. With their combined powers, they defeat Goenitz. If Goenitz is defeated by the special team consisting Iori, Kyo and Kagura, Goenitz is destroyed.

While Goenitz only appeared in non-canon entries as a hidden boss since then, ever since Verse's defeat in The King of Fighters XIV, while not confirmed to had his soul in Verse, it is likely that Goenitz was revived.

Goenitz is a very calm and collected person, posing just like a typical messenger of god who wants to save people. However, underneath such a façade, he is a typical Orochi member who views humanity with hatred and contempt.

Goenitz is a man from middle age high and with hair black and blonde, with skin white, which uses clothes of priest with blue color. 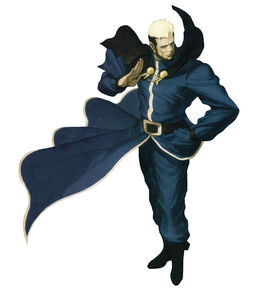 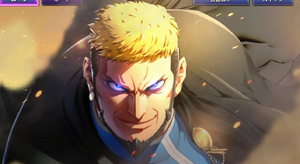 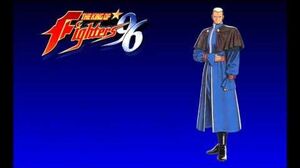 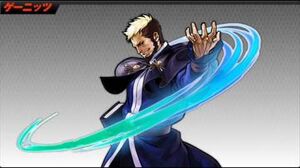 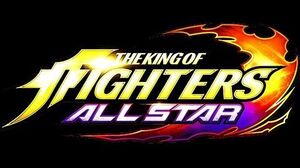 The King of Fighters All Star OST (TRASH HEAD)