Start the Human Order Incineration Ritual to remold humanity into a better place.

Being the mastermind over attack against Human Order
Threatening the Humanity

Goetia, also known as King Solomon, the King of Demon Gods, the King of Magic, Beast I and the Grand Caster, is the overall main antagonist of Fate/Grand Order: Observer on Timeless Temple, a posthmous antagonist in Epic of Remnants, and a supporting protagonist in Cosmos in the Lostbelt.

Goetia is the First Beast from the Evils of Humanity, representing Pity (as in "the sheer arrogance of people pitying and being disappointed in other people"). He is the mastermind behind the seven Orders and the attacks on humanity. He's also the one behind the attacks on the Human Order.

London: The Death World in the City of Demonic Fog

In his "Solomon" disguise, Goetia appears as the main antagonist of London Chapter, revealing himself to be the one behind the whole Singularity, who Makiri Zolgen, Charles Babbage and Paracelsus served.

After the defeat of Nikola Tesla and Artoria Alter, Goetia appeard under his disguise as Solomon and faces Ritsuka Fujimaru's party with four Demon Gods, eliminating Shakespeare, Kintoki and Tamamo no Mae. Goetia/"Solomon" nearly kills Mordred, but she was saved by Andersen, who confronts Goetia/"Solomon" about the origin of the Holy Grail War system.

Goetia/Solomon confirms Andersen's theories, revealing himself to be Grand Caster, before killing Anderson. After killing Anderson, Goetia/"Solomon" then decides to retreat, as he doesn't see Chaldea as a real threat, saying they were never even worthy of his attention in the first place, before he left.

Babylonia: The Absolute Frontline in the War Against the Demonic Beasts

In the seventh Singularity, Goetia (as "Solomon") is revealed to be the overarching antagonist in Babylonia Chapter, largely due to being the mastermind who released Tiamat from her imprisonment.

In the final chapter, Chaldea eventually discovered the trace of "Solomon" and his Time Temple. Goetia's power caused the Demon Pillars appearing everywhere in Chaledea, forcing Ritsuka and their friends set out to fight against them in order to eliminate them all.

Later, Goetia/"Solomon" is confronted by Ritsuka Fujimaru and Mash Kyrielight. Goetia explained to them about both his Noble Phantasms and his plan to use the Magical Energy from humanity's destruction to power his true goal. He then went on to kill Ritsuka in order to remove the Heroic Spirits, but he is blocked by Mash. Ritsuka and his Heroic Spirits marched on and defeated Goetia's Grand Caster form.

After his Grand Caster form is defeated once again, Goetia was impressed with Ritsuka and Mash's resilience. Then, Goetia revealed his true form and his idenitity as the Beast I in front of the Chaledea Crew, starting another battle. During their fight, Goetia attempted to convince Mash to join him in creating a world where death no longer existed. However, Mash declined and resolved to reject Goetia and his view of life. Disappointed, Goetia unleased his final Noble Phantasm, Ars Almadel Salomonis, at Mash and Ritsuka, but she uses Lord Camelot to protect Ritsuka at the cost of her own life.

The death of Mash devastated Ritsuka. Knowing how Ritsuka must feel he allows them to punch him, though he expresses that they will be destroyed when that happens. However, Dr. Roman/Romani Archaman interrupted them both and revealed his identity as the real King Solomon, much to Goetia's disdained shock.

Expressing that Solomon was too late to stop him, Goetia prepared to kill him, but Solomon activated Ars Nova, removing Goetia's immortality and sacrificing himself. After saying his final goodbye to Ritsuka, Solomon/Dr. Roman eventually faded from existence forever.

Though initially shocked at Solomon destroying his own existence, Goetia quickly becomes enraged and prepares to kill everyone, but he was weakened so much that his Beast form was destroyed once more. After Goetia's apparent defeat, the Demon Pillars and the Time Temple began to collapse. Goetia was then dealt a seemingly final blow by Ritsuka with their Command Spell.

However, later during Ritsuka's escape, Goetia revealed he had survived Ritsuka's Command Spell and suddenly appeared before them to prevent their escape, stating that they would perish together. Under this state, Goetia has transformed himself into Human King Goetia, a humanoid being made of Goetia's essence possessing what remained of Solomon's smoldering corpse. Goetia lamented that all of his plans have failed due to Roman/Solomon's sacrifice, but stated he started to understand humans thanks to his now limited existence.

Ultimately, Goetia decided to use the last ounce of his energy to kill Ritsuka, even if knowing that the act was meaningless and his defeat was imminent. Unsurprisingly, the final form of Goetia proved to be much weaker and eventually got destroyed. After this final confrontation, Goetia accepted his defeat, stating that the briefness of human life is surprisingly interesting. Then, Goetia vanished alongside the rest of Solomon's corpse.

After the apparent death of Goetia, Chaledea along with the Human Order is restored, with Mash coming back to life. However, Fou loses his sentinence after his Authority of the Beast was removed, while the Chaledea's beloved Dr. Roman, also known as Solomon, vanished forever after giving his final moment to save humanity.

In Moonlight/Lostroom OVA, Goetia is mentioned by Galahad when he abandoned Ritsuka and Mash. Galahad blames the protagonist entirely for the current crisis of the Alien God and the Lostbelts. Galahad claimed that Goetia's defeat directly caused the rise of the Crypters, and eventually he broke his tie with Ritsuka and Mash. Galahad makes it clear that he was only helping them because of the Command Spell forcing him to, and even then, he made it clear he will continue to defy the Protagonist at every turn.

While initially believed to be destroyed, Goetia appears as the off-screen narrator of the first Preview of Cosmos in the Lostbelt, pretending to be Solomon once more and narrating the coming storm towards Chaledea and humanity, as well as the rise of Lostbelts. However, he showed some anticipation towards the upcoming battle and encouraged Ritsuka to confront the Crypters and saved humanity, ending the preview with a confident laugh.

It was widely presumed that Goetia is still alive somewhere, since there was a mysterious fighter who was mentioned in both Russian Lostbelt and Nordic Lostbelt, helping the Chaledean Crew and Lostbelt citizens, but he never mentioned his name. Before reaching the Chinese Lostbelt, Mash felt a similar feelings of warmth she felt in Norse Lostbelt, which hinted that Goetia was chasing the Shadow Boarder from behind.

It is implied that Goetia was following the Shadow Boarder into the Lostbelts and fending off the allies of Crypters in his own way, and if that's true, still his intentions are unknown yet.

The aforementioned mysterious man appeared as a pivotal ally in the two-part Greek Lostbelt. In the Atlantic Lostbelt, he had conversed with Miyamoto Musashi and stated that he could not forsee her future, and dissing the Chaldea crew that they were too foolish to bring such a crew into an ocean like the Atlantic Lostbelt.

By the climax of the story, the mysterious person managed to rescue the Chaldea crew and revealed himself to be Romani Ackerman in disguise. In his communication, "Doctor" warned the Chaldea crew that there is someone in their group that they cannot trust before he left, possibly hinting Sherlock Holmes.

However, this "Dr. Roman" had orange eyes while the real Dr. Roman had green eyes, thus it was possible that this person was actually Goetia.

Whilst not making an appearance, the man in the hood is mentioned by Koyanskaya, who comfirmed that he was Goetia who somehow revived and was on his way to stop the Alien God.

Goetia is the aggregate body of the 72 Ars Goetia demons invented as "a system to efficiently promote proper reason" by King Solomon which had their own free will. They grieved and raged against the relationship between their master and humans, as they wished to conquer the human imperfections King Solomon always ignored.

After Solomon's death, Goetia alongside the Demon Pillars were sealed away in his corpse and awakened to their own self. They took Solomon’s name, considering themselves to be the true King of Magecraft. They embarked on a plan to convert mankind into energy, attempting to reach the origin while making use of all human history, to create a world without death.

Eventually, Goetia himself transformed into a curse that takes action to conquer "the imperfectness of humans" that King Solomon continued to ignore. Taking control over Solomon and the Demon Gods, Goetia began by creating Singularies through fake Holy Grails and instigating the Human Order Incineration Ritual, thus starting the whole game's events.

While being a Beast of Calamity, Goetia could be considered as a well-intentioned extremist since he tried to save human order in his own way. He is arrogant, spiteful but not without an honorable side, and he showed no qualm over teasing his enemies' inferiorty and believed he was putting them out of misery the real Solomon overlooked.

However, in spite of severity of his crime, everything Goetia was doing because he genuinely believes it will make mankind happy and prosperous, unaware of how going through with his plan won't produce a better mankind, simply unevolving plants that will never accomplish anything.

Goetia believed so righteously in his goal and convictions that he will never give up to see them through. His main motivation is pity, but it's the kind of pity that comes from arrogantly feeling sorry for others because they aren't as great as he is. Therefore, he shows no remorse about destroying humanity because their lives are so empty and meaningless that ultimately he's doing them a favor. 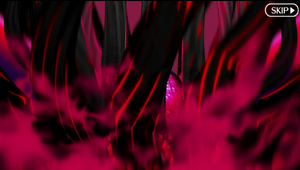 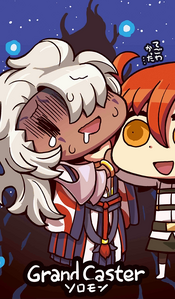 Goetia (as the Grand Caster) on April Fool's Day 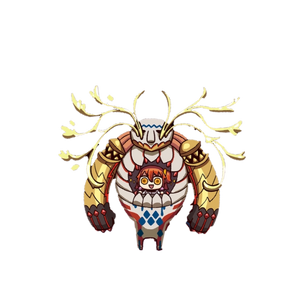 Retrieved from "https://villains.fandom.com/wiki/Goetia?oldid=3790155"
Community content is available under CC-BY-SA unless otherwise noted.