Take Pete back to their farm to let Pete do their slavery (failed).

The Gogan Family are major antagonists in the Disney's 1977 film Pete's Dragon. They are an abusive family of hillbillies who treat the orphaned protagonist (Pete) as a slave. Eventually Pete can no longer put up with the abuse and flees, but they pursue him, only to be repeatedly driven off by the titular dragon, Elliott.

The Gogans are quarrelsome, selfish, lazy, cruel, clumsy, and foolish (in one scene, Pete's guardian Nora even asks, "D'you want to be stupid when you grow up, like the Gogans?", to persuade him to attend school). Of the four, wife and mother Lena Gogan is the most intelligent: it is usually she who makes plans, recalls the others when they become distracted, and asks fruitful questions. She is also the only one to show any courage, as in the scene wherein she confronts Elliott the dragon with the 'Bill of Sale' authorizing her to keep Pete (only to have Elliott burn it on the spot); but spends much of her time complaining to her sons and husband about every little discomfort. Her husband Merle serves only to carry out her orders, and as a crude disciplinarian over their grown sons, Willie and Grover, who act as a comic duo and pick fights at a moment's notice, even among themselves. Merle is also said to have been Pete's overseer, in his time under their control. All four enjoy bullying and tormenting any creature weaker than themselves, of which Pete serves as the chief example. Like all rustic-themed villains, the Gogans pretend to a great respect for the rule of law, but ignore it whenever they please, and despise education. In keeping with the same motif, they enjoy dirt, especially on themselves, and dislike bathing and all forms of cleanliness.

Having "paid their last fifty dollars for Pete, plus fifty cents legal fees", the Gogans hate the idea of working for themselves, and thus decide to pursue Pete and drag him back to the farm as their slave. They are tipped into a mud-pit by Elliott, and lose Pete's trail in the forest.

The Gogans later track Pete to the fishing village where he is cared for by a kindly lighthouse keeper, Nora. When the Gogans again try to capture Pete, they are shipwrecked by Elliott in the harbor.

The Gogans are later recruited by Dr. Terminus, the other antagonist of the film, who is seeking to capture Elliott for use in medicine. When Terminus lures Pete and Elliott into a trap, the Gogans kidnap Pete, but Elliott manages to break free of Terminus' net, and saves Pete from the Gogans, before incinerating their Bill of Sale, dousing them in a barrel of creosote, and chasing their horse away.

The Gogans were not seen after this, but they are presumed to have fled the village, never to trouble Pete again. 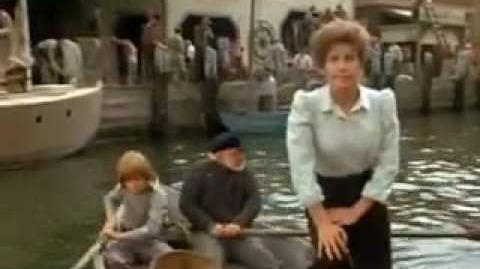 Pete's dragon - bill of sale
The Gogans arriving in town and causing trouble (via their famous song "Bill Of Sale").