Assisting O-Ren in her criminal activities.

Kill The Bride and defend her mistress O-Ren Ishi (failed).

Gogo Yubari is the secondary antagonist in the 2003 film Kill Bill Volume 1.

She was portrayed by Chiaki Kuriyama.

Gogo is a young associate of O-Ren Ishii and a severely disturbed 17-year-old Japanese schoolgirl who takes sadistic delight in killing. She is O-Ren's top assassin and personal bodyguard. Gogo's disturbed mind and vicious penchant for killing is displayed when she offers herself to a drunken man in a bar and then disembowels him.

When The Bride slaughters several of O-Ren Ishii's immediate guards at the House of Blue Leaves, Gogo appears with a large meteor hammer and engages her in a fight. Although The Bride gives Gogo the opportunity to walk away, Gogo refuses to back down.

The two have an extended fight, with Gogo quickly gaining the upperhand by strangling The Bride savagely with the chain of her weapon. However, The Bride manages to emerge from the fight alive when she drives a broken chair leg studded with nails into Gogo's foot and, while she is subdued by the pain, drives the chair leg into the side of her head, killing her. As Gogo slowly dies, blood leaks from her eyes.

Gogo is an excellent fighter, so much so that out of all the enemies that The Bride goes up against in Kill Bill Volume 1., she is the only one that actually comes closest to killing her. She is extremely sadistic, and prefers to toy with her victims before killing them in a slow, painful manner. Gogo is also shown to be somewhat arrogant, as she is unflinchingly willing to fight The Bride, overly confident in her abilities and underestimating The Bride's resourcefulness, a miscalculation that costs her her life. 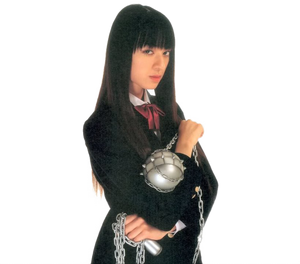