The Gohs (with Goh Min)

Leader of the 54 Immortals

Kill John Taylor and Jacob Hendricks to avenge her brother.
Get revenge on the CIA by destroying all of their safehouses (all failed).
Kill the Player (simulation, failed).

Goh Xiulan is a major antagonist in the 2015 video game Call of Duty: Black Ops III. She is the head of the crime syndicate, the 54 Immortals, and the sister of Goh Min.

She was voiced by Lynn Chen.

Goh Xiulan was born in 2036 to 54 Immortals leader Goh Cheung. When Cheung was murdered by Hyun Jiang, who took control of the syndicate, Xiulan and her brother Goh Min were taken in by enforcer and Cheung loyalist Jae Xiong, who eventually killed Jiang in 2048, allowing he, Goh Xiulan and Goh Min to take over. Xiong was killed by the CIA, allowing Xiulan and Min to take over and expand the 54 Immortals into Singapore and turn it into an organization built on human trafficking and arms dealing, as well as forming an alliance with the Common Defense Pact.

In 2064, the 54 Immortals were contracted by the CDP to explore a Coalescence Corporation facility in Singapore, where Xiulan and Min met rogue CIA agent Dylan Stone, who sold sensitive information to them, which they planned to sell to the CDP. However, the American government discovered this and John Taylor and Jacob Hendricks were sent to recover it disguised as arms dealers. They attempted to get the info from 54 Immortals trader Danny Li, but Xiulan and Min, anticipating this, arrived with a group of enforcers and blew their cover.

However, when Xiulan was about to give the order to kill them, a group of soldiers burst in and opened fire, killing Min and the enforcers, although Xiulan managed to escape with the data. Taylor chased her and managed to catch up to her and knock her unconscious as she attempted to upload the data, before cutting her hand off in order to access her computer and retrieve the data. She then replace her missing hand with a prosthetic.

Having sworn revenge on Taylor, Xiulan tracked him and Hendricks to the Coalescence facility, where they had found and killed a defector who was in the process of leaking more sensitive information, including the location of the CIA safe houses. After viewing this information, Xiulan had her men flood the facility in order to drown Taylor and Hendricks, although they managed to escape. She then ordered an attack on a nearby safehouse.

Leading the attack on the safehouse, Xiulan managed to defeat the CIA forces and kidnapped Taylor's handler Rachel Kane, who she then began torturing inside the burning safehouse in order to discover Taylor's location. However, Taylor tracked her down and saved Rachel, before being attacked by Xiulan. Although she knocked him down, he managed to gain the upper hand and forced Xiulan' s head into one of the various fires around the safehouse, burning her face off and killing her.

Although the game takes place years after Xiulan' s death, she is able to appear due to the Player's consciousness being inside Taylor's mind, meaning he lives through much of Taylor's life and takes his place in all the missions against Xiulan due to the actions of the rogue AI Corvus. 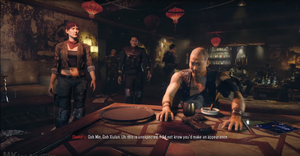 The Goh siblings confront the Player and Hendricks. 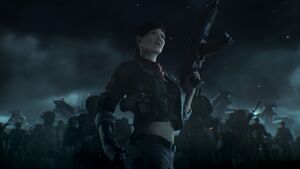 Goh Xiulan in the opening cinematic of "Hypocenter". 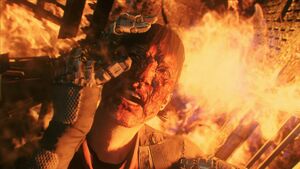 Goh Xiulan's death in the simulation.